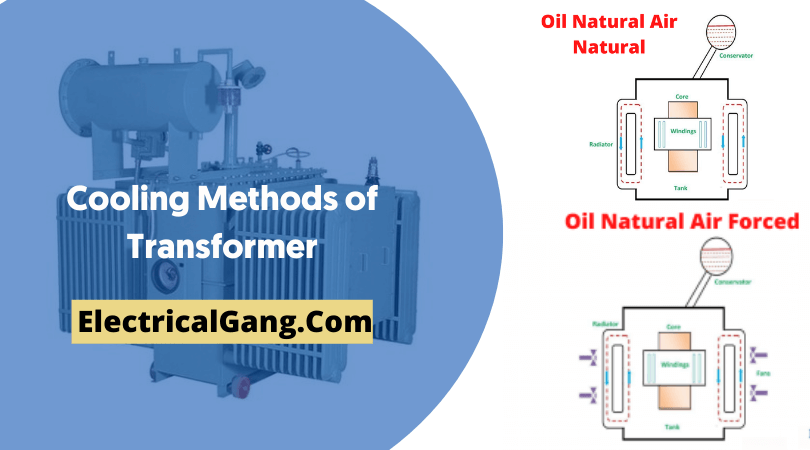 Hello friends, let’s see in today’s article what kind of method is used to keep the transformer cool. The cooling method in a transformer is to dissolve the heat generated in it. Various methods have been used for this.

No transformer is an ideal transformer so there will be some loss due to heat. Most of the time this heat is converted but if this heat does not melt properly then this high temperature becomes the main problem of insulation failure of the transformer.

Can From this, it is clear that the transformer needs a cooling system. Various factors are responsible for generating the main heat in the transformer which can lead to damage like hysteresis, eddy current, iron, and copper damage.

Transformers Can Be Divided Into 2 Main Types:

Dry-type transformers include 2 methods no one is Air Natural and the second is Air Blast.

This type of method is commonly used in small transformers. In this system, the heat generated in the transformer is cooled by the circulation of natural air.

When the temperature of the transformer exceeds the specified temperature an alarm is activated and the fan and blower are turned on automatically. This method is suitable for transformers up to 15 MVA. 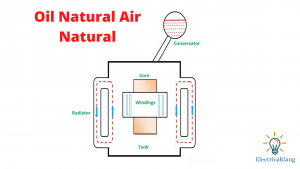 And in this empty space, the oil in the radiator takes its place. The oil in the upper part releases the heat in the atmosphere due to the cold air around here and cools itself. And stays in the radiator again. This type of cooling is used in transformers up to 30 MVA.

In this type of method, heat loss can be prevented by applying compressed air to the heat-releasing surface. The pressure also cools the transformer faster than natural air. 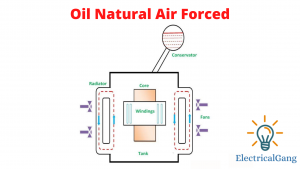 This method is commonly used for large transformers up to 60 MVA. This costs more than the other process as in other processes oil and air are handled naturally but thus fans and blowers are used as additional equipment for oil cooling.

This method is known by its name. Air and oil are used for forcibly cooling the transformer. Thus a heat exchanger is fitted in which hot oil is pumped out. And the air is passed through this heat exchanger by turning on the fan. 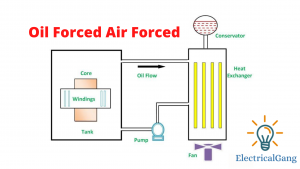 This method is very similar to Oil Natural Air Natural. The same system works when the load across the transformer is low. When the load on the transformer increases, the heat also increases. This is why it has an alarm set that automatically turns on the pump and fan as the temperature rises.

This cooling system is used in substations and power stations or where higher rating transformers are used.

This method is exactly the same as Oil Forced Air Force. It also has a heat exchanger. The heat exchanger is used to separate heat with the help of pressurized water. 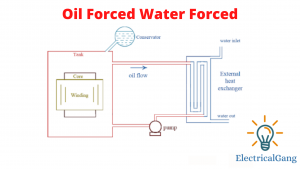 The oil level and pressure are always kept higher than the water. If there is a leakage in the system, the oil collects in the water but the water does not dissolve in the oil. This type of cooling system is commonly used in very large transformers with a 100 MVA rating. Or space where the banks of the transformer are installed. This system is usually used for transformers installed in hydropower plants.