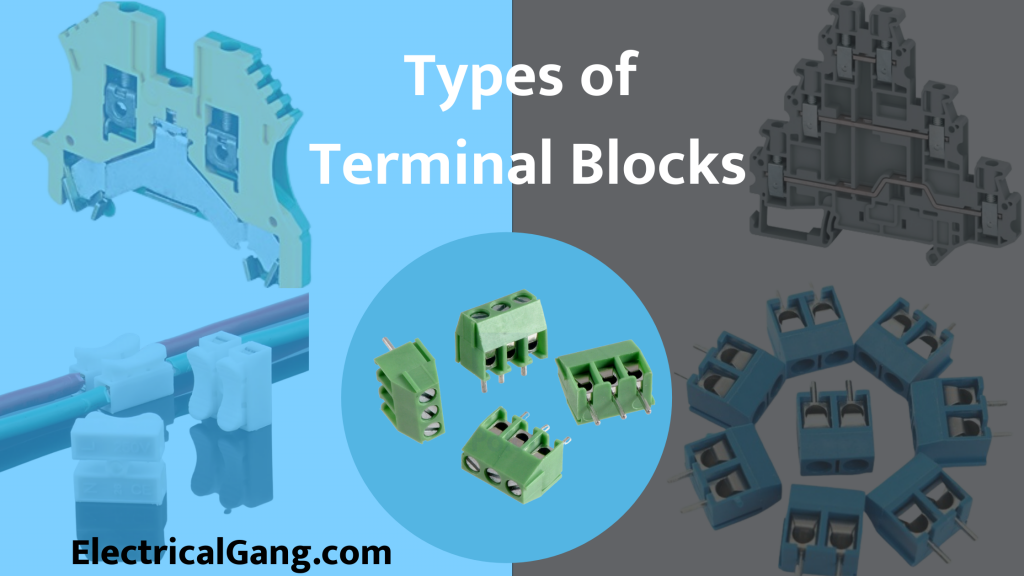 But when you have to take a lot of output from one wire, the joint system is neither the right way nor the safe way. Terminal Block is used to connect this properly. So in today’s article, we will see what is Terminal Block and how many types it has.

What Is a Terminal Block? 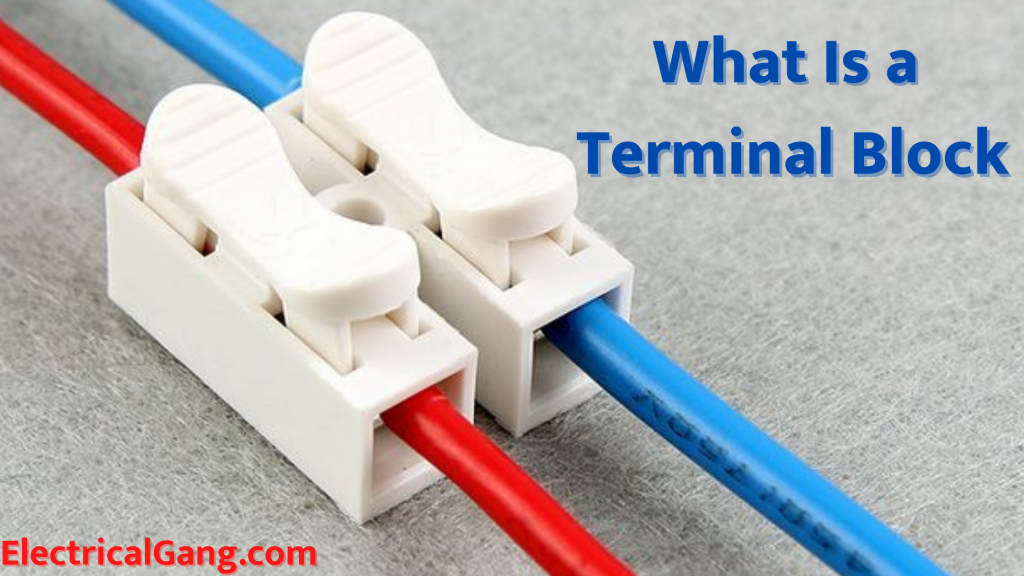 A terminal block is also known as a connection terminal or terminal connector. Inside is a modular block attached to an insulated frame. Which helps us to connect one or more wires together safely and securely. It includes a clamping component and an operating bar.

A metal strip is included in the construction of the terminal block so that it can easily carry current. Which also provides support for connecting wires. The body has a mounting adjustment so that it can be easily mounted or unmounted by a PCB or mounting rail.

Most of the terminal blocks used in the market are usually modular, mounted on DIN rails, which allow an increase or decrease in the number of terminals as required. Due to the terminal connection, the joint of the wire can be kept proper and secure. And the wire can also be properly aligned.

Terminal blocks can be classified on the basis of their structure, device type, termination options.

In Structure Type, it is divided into three types which are as follows: 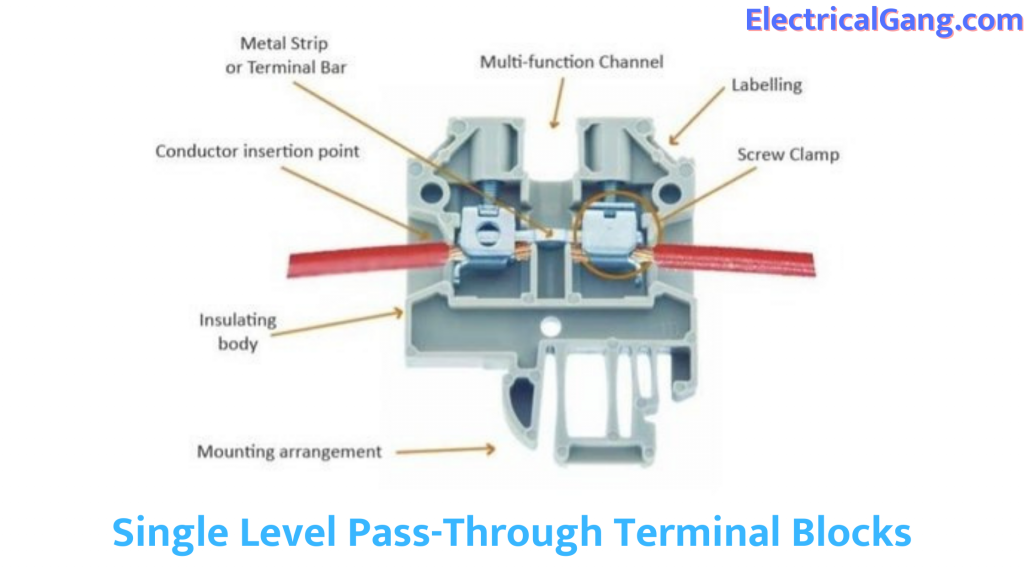 This system is used to connect two wires together. In another simple language, wire to wire connection is also known as a single feed terminal. This type of system is quite simple with one wire as the input and the other wire as the output. 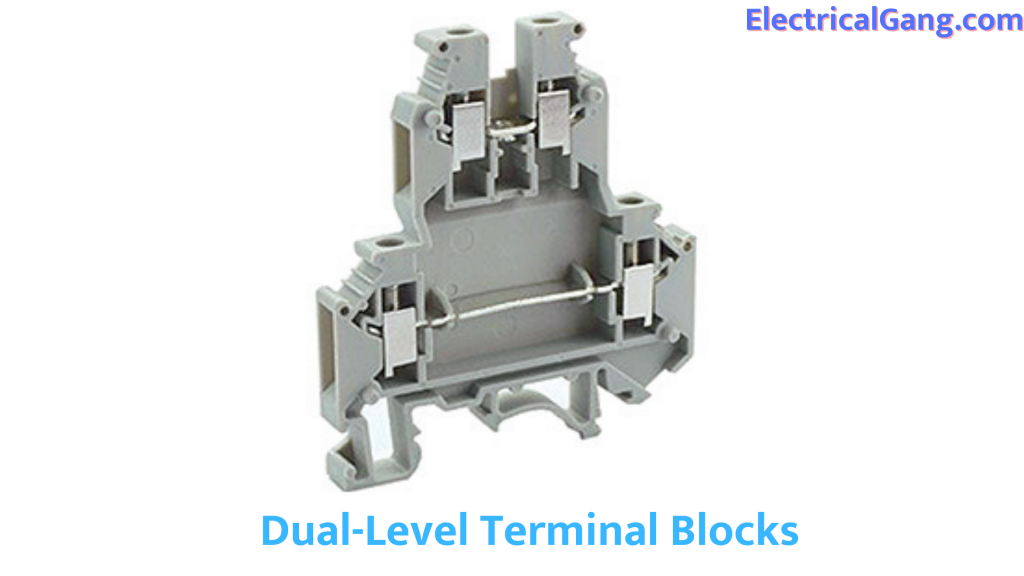 This system is typically used to save space. This block is the second level of the connection which is fixed on the first. 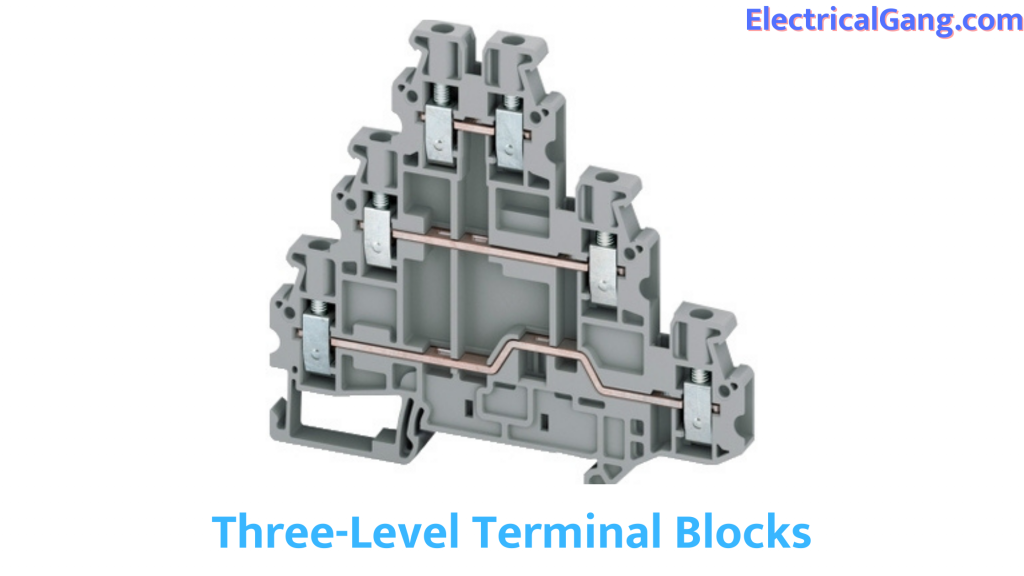 Like dual-level terminal blocks, we create an extra layer like this. The advantage of multilevel blocks is that many connections can be made in a single block.

In Device Type, it is divided into five types which are as under: 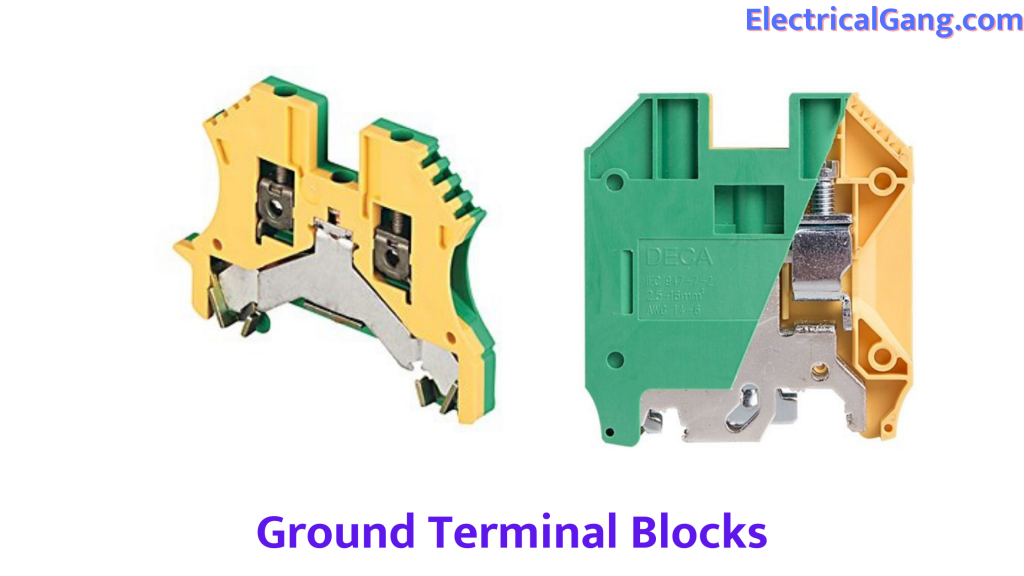 These blocks are similar in appearance to single-level feed-through terminals. The problem is that these blocks and the metal connection where the wire is completed depend on the panel or DIN rail on which the block is mounted. 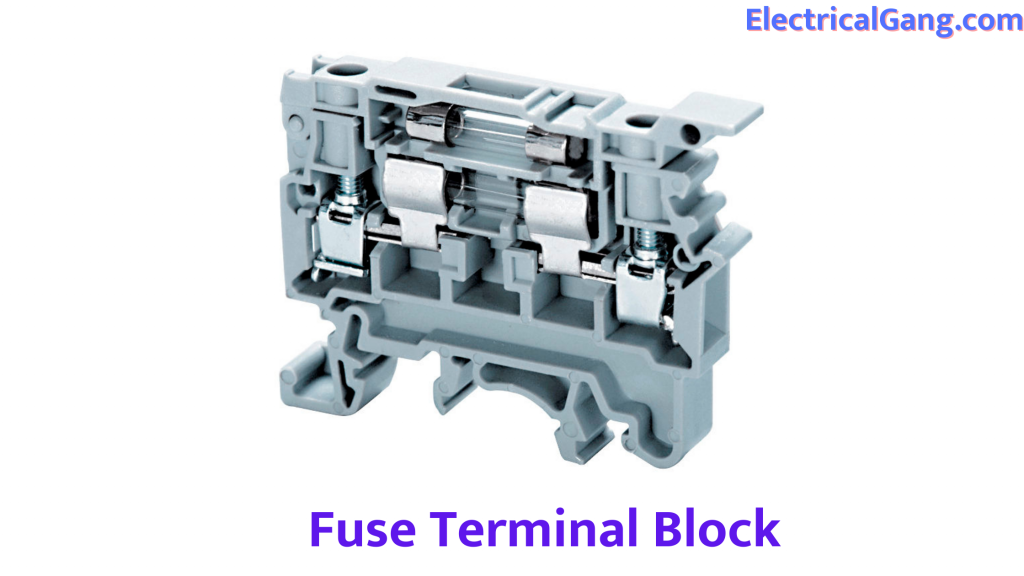 This is similar to the pass-throw blocks with the object of the metal connection bar. Which is replaced with a fuse. That is why the wire connected to it is passed through the fuse to provide security to it. 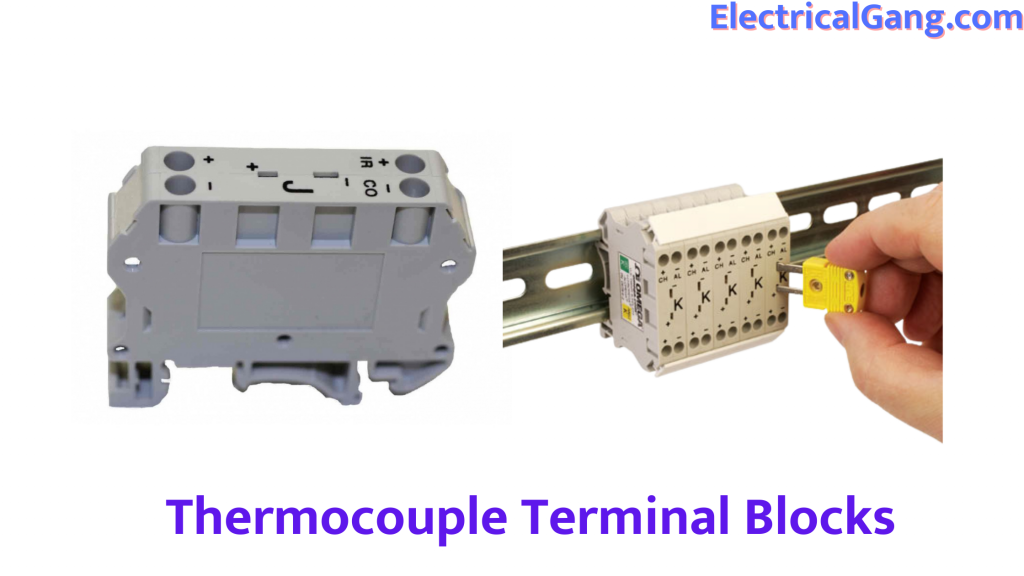 I/O Blocks are used to connect the device and the controller. While the sensor blocks easily handle three- or four-wire devices, such as near-sensors. 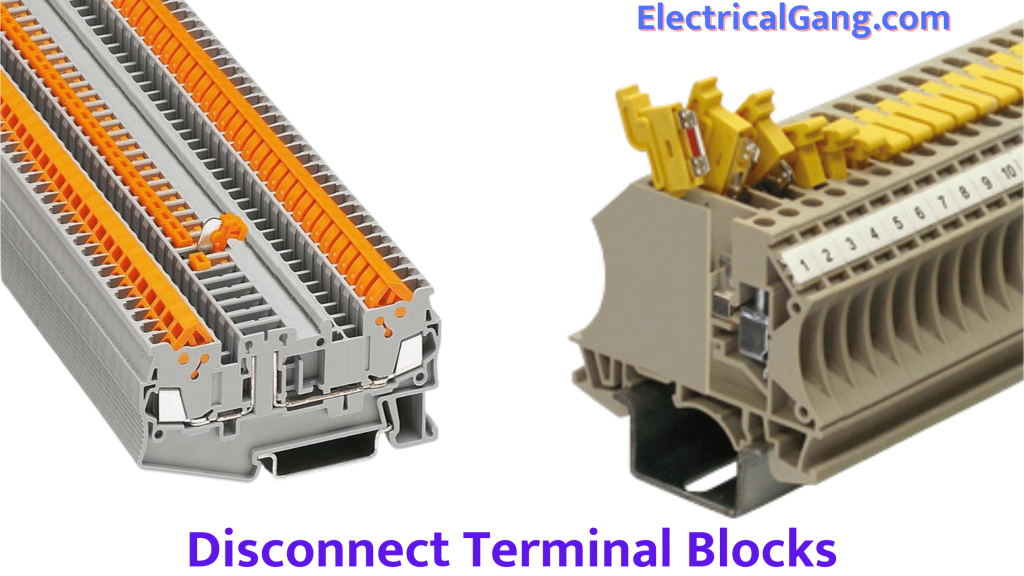 With the help of this block, the connection of the circuit is disconnected by lifting the lever switch. This block allows the wire to be easily connected and removed from the circuit apart from the cut function. Disconnect Terminal Blocks are also known as switch blocks. 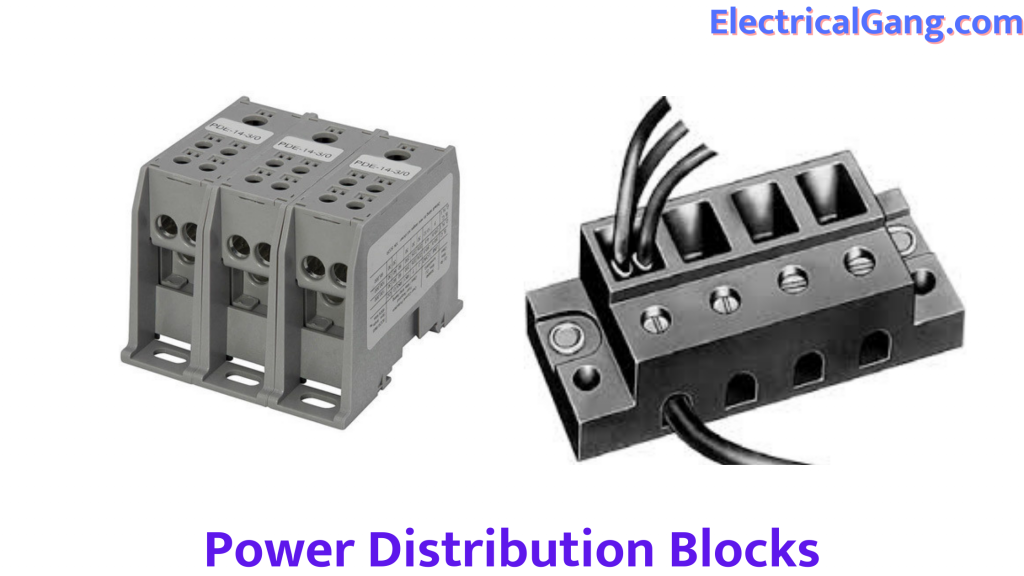 This block can only be identified by its name. This is used in the distribution of electrical power. Multiple outputs can be easily taken with the help of one input through this terminal. This method is also the most suitable and economical and safe way to distribute.

In this method, as shown above, one input is given in power at a time and multiple outputs are provided in its output. The wire can be properly configured in the Matej Control Panel. So as to give it a neat, clean, and professional look.

There are 5 ways to clamp in a terminal block which is as follows: 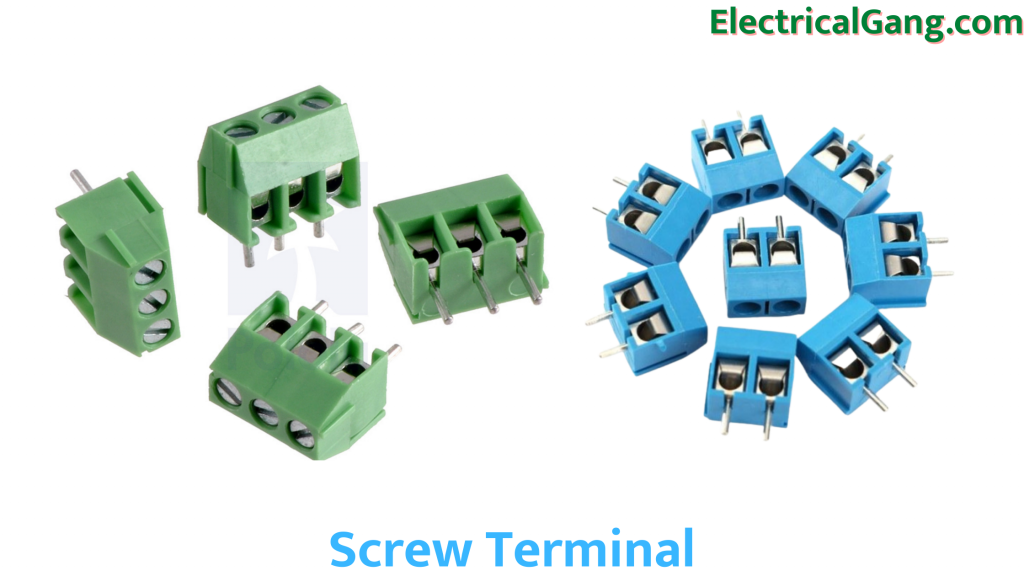 This type of method is the most common type of method under which the wire is easily fixed with the help of a screw according to the conductor strip alignment of the block in it i.e. tightened. The screw terminal method involves a very wide range of wire or conductor sizes.

This method uses a spring to attach the wire to the terminal block. This type of method is of a slightly different type than the screw terminal. Spring Clamp is usually used for small wire sizes.

Inside Push-In Terminal Blocks, you can only insert one wire. Large amounts of the ferrule are used in push-in terminals. The use of ferrule strengthens the ends of the wire. However, some push-in terminal blocks allow the insertion of a solid conductor or a helpless conductor directly by inserting a screwdriver into the release hole.

In this system, we do not need to cut or loosen the insulation of the wire. To make this contact, only the wire is inserted into it. Inside, two sharp metal blades of metal will cut the conductor properly to make proper contact with it.

This terminal block is used where there is excessive vibration. This is connected to a spade or ring terminal. It is then bolted to the nut on the terminal block. So that any vibration in the machine will be affected but this wire will not be loose.

The advantages of a terminal block are as follows:

Space can be saved by using multi-level terminal blocks as it saves up to 50% of the space inside the panel. Because in multi-level blocks it is a multi-level circuit with one block.

This can only be fixed with the help of a perpetual screwdriver or tester. It can be quickly connected and disconnected in any difficult situation. Terminal blocks are mainly used to connect electrical switches and outlets.

The disadvantages of the terminal block are as follows:

What are terminal blocks used for?

A terminal block is a modular insulated block that protects more than one wire at a time. The terminal block is used to secure or terminate the wire in the factory. In their most basic form, terminal blocks have many individual terminals arranged neatly in a long strip.

What is a DIN terminal block?

DIN rails and channels are rack or box mounted connection points to secure two or more wires in a block circuit or power bus. Some types may include single or dual disconnect fuse or switch feature, feed-through capacity, grounding, built-in indicators and resistors, isolation, and circuit protection.

Terminal blocks are available as rows but only one wire is connected to each terminal. The most common method of connection in a terminal block is to use a screw in which the wire is inserted and then clamped using a screw.