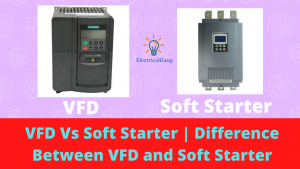 Friends, people say about VFD and soft starter that the motor can be turned on smoothly using VFD. But the same is said for soft starters. So there will be a question in your mind that these two are not the same.

What is a VFD and Soft Starter?

The function of both is to control the motor slowly while turning it on and off.

Means stop the motor from turning on and off one by one. Doing so does not cause a jerk in the mechanical system. But apart from this, VFD has many advantages.

Considering the many benefits, VFD is widely used. But it is not as if the soft starter has stopped or will turn off. The soft starter is also an integral part of the electrical system.

First of all, we have to talk about VFD.

How Does VFD work? 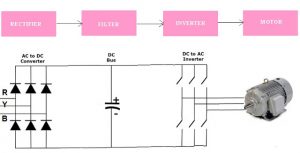 Once the DC voltage is filtered from the filter unit, the inverter unit works. This converts DC voltage back to AC voltage.

But now what we have got from VFD to AC Voltage. Is in the form of a rectifier. This means that we can change the AC output as desired. And we can increase or decrease the speed of the motor with the help of the AC voltage.

How Does a soft starter work?

The main function of a soft starter is to start the motor smoothly in starting. With the help of which mechanical jerk has been done to purify.

Speaking of the soft starter, its complete control is the same as the VFD system. VFD has a rectifier, filter unit, inverter unit. Similarly, a soft processor has a microprocessor inside. Which controls the entire system.

Difference Between VFD and Soft Starter:

A soft starter is used to start and stop the motor smoothly.

Speaking of VFD, VFD is also used to stop the motor from running smoothly. Apart from this VFD also does the work of controlling the motor.

With the help of a soft starter, you can’t change the RPM of the motor while this feature is available in VFD, you can set the required speed ratio.

The way to start and stop the motor smoothly is called motor A acclamation and D acceleration.

Apart from this, the important thing is that not only harmonics are produced in a soft starter, but this is also its biggest advantage. It does not have a case called harmonic so it is considered a good soft starter.

VFD produces large amounts of harmonics, which is why they have an extra filter called a harmonic filter.

Battery vs Capacitor│Difference between Battery and Capacitor

What is the Difference Between AC motor and DC motor

Difference Between Circuit Breaker and Isolator

Difference Between MCB and MCCB | MCB VS MCCB