Home » Difference Between MCB and MCCB | MCB VS MCCB 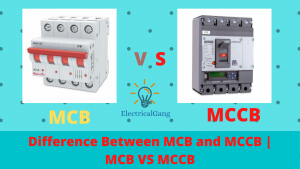 Hi friends, in today’s article, we will see what the difference between MCB and MCCB is. And this is the most frequently asked question in interviews.

Full Name of MCB and MCCB:

Similarities Between MCB and MCCB:

MCB and MCCB are electrical circuit breakers that provide an automatic trip time of fault and protect the equipment.

MCB and MCCB are both low voltage circuit breakers. Both of these are used below 1000 volts.

Both MCB and MCCB protect the equipment in case of short circuits and overload.

Differences Between MCB and MCCB:

MCBs are easily available in the market from 1A to 63A. While MCCB is available from 63A to 1000A.

MCB does not have a system like remote control; it can only be operated manually. While MCCB comes with a remote system that can be turned on or off remotely.

The interrupting rating shows the capability of our equipment. That is how much current the device can take in, as the current in the overload condition is much more.

The amount of current level inside MCB is fixed while MCCB can increase or decrease it.

This is possible in MCCB because there is a port at the top that can be used to increase or decrease the current trip level.

MCBs are used in small or small volume circuits such as small and large appliances in the home, while MCCBs are mostly used in industrial factories. Or more ampere occurred in the circuit.