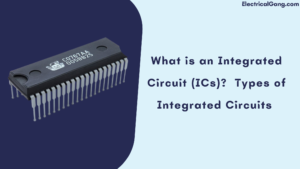 In our daily life, we ​​use various electronic items. Just like we use different things like mobiles, televisions, laptop computers. In which somehow some complex or straightforward circuit is used in all electronic or electrical devices.

Electronic circuits are felt by connecting wires to each other using multiple electrical and electronic components or by conducting wires for the flow of electric current through various components of the circuit such as resistors, capacitors, diodes, inductors, transistors, etc.

What is an Integrated Circuit (ICs)? 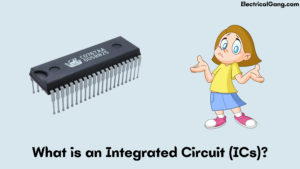 Integrated circuits are also known by the acronym IC. This circuit is a microchip or chip is a microscopic electronic circuit array that is constructed on a semiconductor material wafer using various electronic and electrical components like resistors, capacitors, transistor MOSFET, etc, which can perform the same operation on a large electronic component made up of different electronic components.

All these arrays of components, the microscopic circuit, and the semiconductor wafer material base are integrated together to form a single chip. That is why it is known as an integrated circuit or integrated chip or microchip.

The history of integrated circuits began with the solid-state device. The first vacuum tube was discovered by John Ambrose (J.A) Fleming in 1897, also known as the vacuum diode. As for the motor, he also invented the rule of the left hand. Then in 1906, a new vacuum was discovered. Which was named triode and is used for expansion.

The transistor was then invented in Bell Labs in 1947 to partially replace the vacuum tube because of the small components of the transistor that use a small amount of power to work. Different circuits were arranged on printed circuit boards by using different components separately as well as by hand control called unconnected circuits. This IC uses a lot of power and space and its output is not very smooth.

From 1961 to 1965, small-scale integration technology was used to make 10 to 100 transistors on a single chip to make flip flops and logic gates.

From 1966 to 1970, medium-scale integration (MSI) technology was used to make 100 to 1000 transistors on a single chip for the manufacture of multiplexers, decoders, and counters.

From 1971 to 1979, large-scale integration technology was used to make 1000 to 20000 transistors on a single chip for the construction of RAM, Microprocessor, ROM.

From 1985 until now, Ultra Large Scale Integration (ULSI) technology has been used to build 6400-bit microprocessors to build 50000 billion transistors on a single chip.

Different types of ICs have many limitations, some of which are as follows: 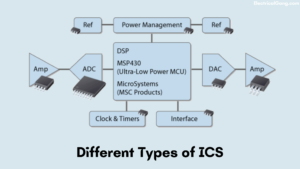 An integrated circuit that operates only at certain defined levels instead of managing the overall level of the signal vibration area is known as a digital IC. This IC can be designed using digital logic gates, multiplexers, flip-flops, and other electronic components of the circuit. These logic doors work with binary input data or digital input data. Such as 0 (low or false or logic 0) and 1 (high or true or logic 1). 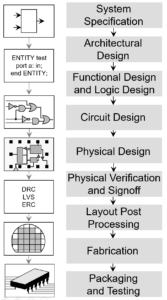 The figure above shows the steps involved in the design of a typical digital integrated circuit. Such digital ICs are frequently used in computers, microprocessors, digital signal processors, computer networks, and frequency counters. There are different types of digital ICs such as logic ICs, programmable ICs, memory chips, power management ICs and interface ICs. 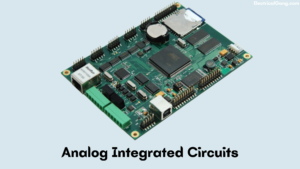 The most widely used analog IC is an operational amplifier or op-amp. Which is similar to a differential amplifier but has a very high voltage gain. It has a much smaller number of transistors compared to digital ic and uses computerized simulation tools to develop analog application-specific integrated circuits (analog ASICs).

n analog integrated circuits if a linear relationship exists between its voltage as well as current it is known as linear IC. The best example of this linear IC is 741 IC, 8-pin DIP (dual in-line package) op-amp, 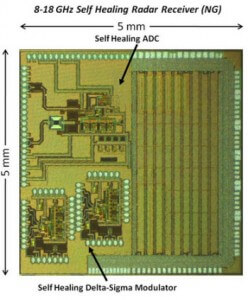 Integrated circuits obtained by a combination of digital and analog ICs on a single chip are known as mixed ICs. This IC works as an analog to digital converter and digital to analog converter and clock IC.

An example of a mixed integrated circuit as shown in the figure above is a photo of an 8 to 18 GHz self-healing radar receiver.

This is the result of advances in mixed-signal systems-on-a-chip integration technology, enabling the integration of digital, multiple, and RF functions on a single chip. 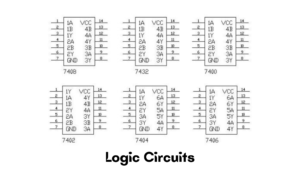 This IC is designed to use logic gates that work with binary inputs and outputs (0 or 1). This is especially used by decision-makers. Provides output based on logic gates logic or truth table, a circuit connected inside all logic gates connected to IC. As such this output is used for a specific purpose function. A few logic ICs are shown below. 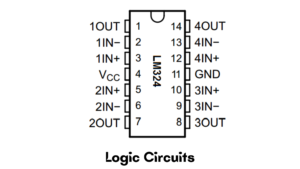 Comparable ICs are used to compare inputs. Outputs are then generated based on comparisons of ICs. 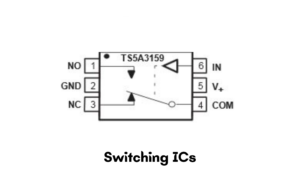 The switch or switching is constructed using an IC transistor and is used to perform the switching operation. The following figure is an example showing the SPDT IC switch.

CMOS integrated circuits are most commonly used in different applications compared to FETs due to their capabilities such as low threshold voltage, low power consumption. CMOS IC consists of P-MOS and N-MOS devices that are built together on the same chip. The structure of this IC is a polysilicon gate which helps to reduce the threshold voltage of the device, thus allowing processing at low-voltage levels.

This type of integrated circuit provides a stable DC output despite changes in DC input. The most commonly used types of regulators are LM309, uA723, LM105, and 78XX ICs. 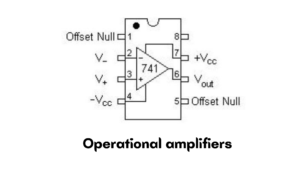 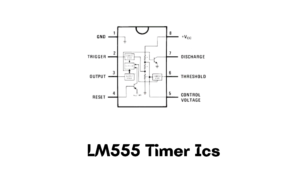 All this can be considered as the generation of integrated technology. ICs are also classified on the basis of packing technology and fabrication technology. There are many types of IC, in which IC will act as a timer, counter, register, amplifier, logic gate, oscillator, adder, microprocessor, etc.

Types of Integrated Circuits based on Classes:

Integrated circuits are available in the market in three categories depending on the technology used in making them.

This type of IC uses passive components such as capacitors and resistors although the transistor and diode are connected as separate components for designing. These ICs are simply a combination of an integrated circuit as well as a separate component and these ICs have relevant characteristics and appearance apart from the way of film testimony.

These ICs are designed by running films that deposit materials on the surface of glass or on a ceramic stand. Changing the thickness of the films on the material will have different resistivity, and a passive electronic component can be produced.

In this type of integrated circuit, the silk print method is used to create the required model on the ceramic substrate. Sometimes, these types of ICs are called printed thin-film ICs.

In this type of IC, the silicon chip is formed by the interconnection of active and passive and separate components. It is derived from the Greek word as mono is nothing but singular while lithos means stone as its name implies. This IC is currently used for its low cost and reliability.

These ICs, which are commercially constructed, are used as voltage regulators, amplifiers, computer circuits, and AM receivers. Although these IC components have poor insulation, their power rating is also low.

As its name suggests, multi means above an individual chip that is connected to each other. These ICs include active components such as diodes or diffused transistors. While inactive components are capacitors or resistors scattered on a chip. These components can be combined by the method of metalized prototypes. This type of integrated circuit is widely used for the application of high-power amplifiers from 5W to 50W. Compared to monolithic integrated circuits, the performance of hybrid IC is good.

ICs are divided into two types based on packages as follows:

This can be designed where the lead pin is fixed by one face of the board and the other side it smokes. Compared to other types, these packages are larger in size. This is mainly used in electronic devices to balance the space of the board as well as the cost limit.

The best example of this package is the dual inline package as it is the most used. This package is available in two types of ceramic and plastic. In ATmega328, the 28-pins are located parallel to each other by extending vertically and laying on a rectangular-shaped board of black plastic.

The space between the pins is kept at 0.1 inches and also varies in size due to the difference in package number. These pins can be arranged in different packages in such a way that they can be controlled in the middle of the breadboard so that short circuits do not occur.

This type of packaging typically follows the mounting technique or the components are located directly on the PCB. Yet the method of its creation helps to make things faster. It also corrects the possibility of error due to the small component and they are arranged very close to each other.

Plastic or ceramic molding is used in this type of packaging system. Different types of surface-mounted packaging that use plastic mold are small profile L-led package and BGA (ball grid array).

The advantages of an integrated circuit are as follows:

This circuit uses less power to work evenly due to its small size and construction.

A smaller circuit can be obtained using IC for a given efficiency compared to a separate circuit.

Compared to discrete circuits, integrated circuits have lower costs due to their fabrication technology as well as less material.

Circuits that use integrated circuits weigh less than separate circuits.

Integrated circuits operate faster due to their switching speed as well as low power consumption.

The various disadvantages of integrated circuits are as follows:

1. How many types of integrated circuits are there?

There are mainly two types of integration which are as follows:

2. What are the different types of ICs?

The classification of different types of ICs based on chip size is as follows:

3. What are the four classifications of ICs?

4. What are the different types of IC packaging?