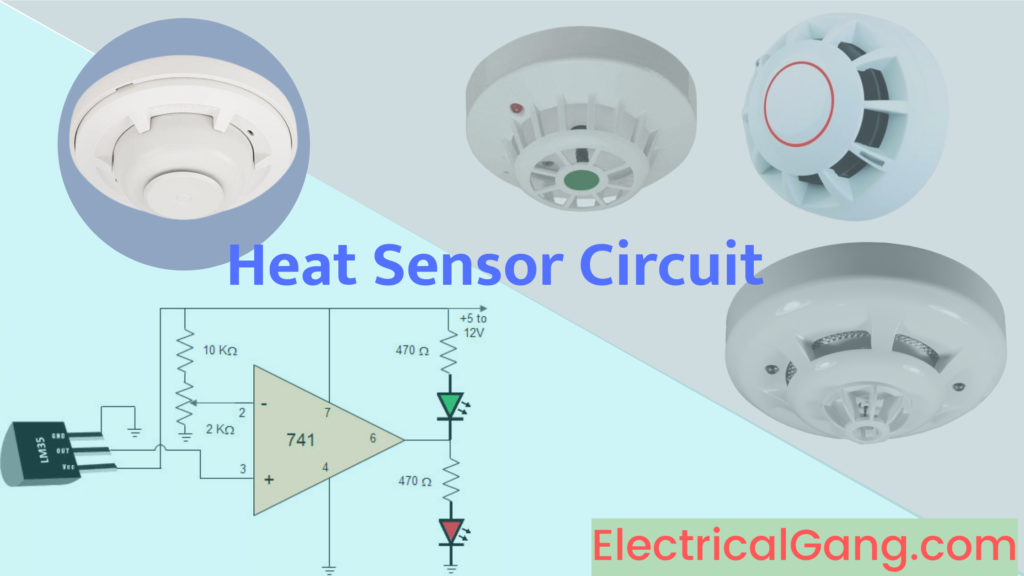 The main function of the heat sensor circuit is to sense heat, which is located on this side of the sensor. When the temperature exceeds a certain value, it is displayed with the help of a flashing LED. Heat sensor circuits are used in various places, such as in all our computers and in large high-tech kitchens, etc.

Excessive heat can damage a computer or equipment in a high-tech kitchen. It senses this heat when the temperature around the heat sensor exceeds its specified temperature. Gives a hint. So that we can keep our devices safe. Using heat sensors, we sense heat from various electronic devices such as amplifiers, computers, etc., and thus generate warning alarms.

A simple diagram of the heat sensor is shown below. The BC548 transistor thermistor (110 ohms) is one of the few components used in heat sensors. A clear explanation of these components is given below. 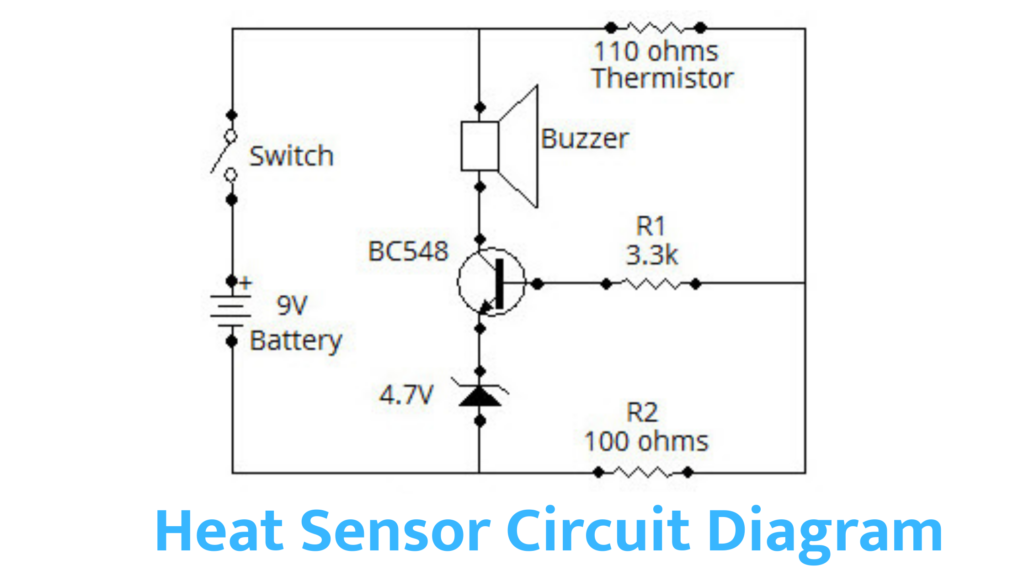 110 Ohms Thermistor: This thermistor is used to detect heat.

Buzzer: Buzzer is between the + 9V battery and the collector terminal of the transistor. The alarm sounds when the temperature rises above the set value.

BC548: BC548 is an NPN-type transistor. This transistor can be replaced by other transistors like 2N2222, BC168, BC238, and BC183, as the characteristics of the transistor shown above are almost the same.

9V Battery: This battery is used to power the circuit.

Switch: In this circuit SPST switch (Single Pole Single Throw) is used. It is your choice to use this switch is not mandatory.

A heat detector is a fire alarm system device that detects fire or heat in the atmosphere. Changes in heat that exceed the limits of the heat sensor are detected by the heat sensor. To avoid a serious accident such as a fire, the heat sensor produces a signal that gives instructions and helps prevent fire damage.

The heat sensor is used with Heat Detector Circuit. It is designed to represent changes in fire and temperature. It is used as a fire warning. It is classified into two sections based on its operation, which are as follows. 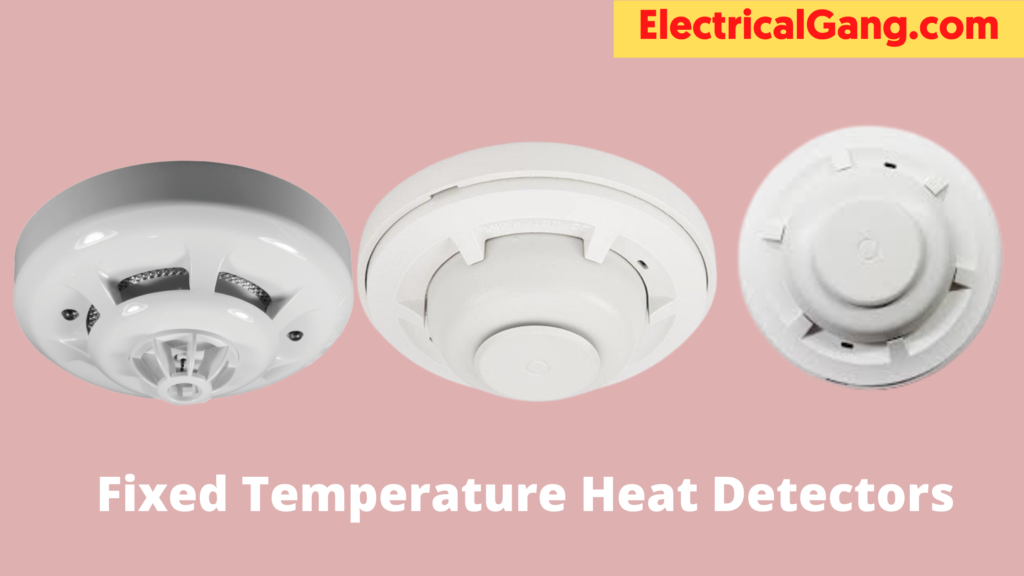 #2. The Rate of Rising Heat Detectors: 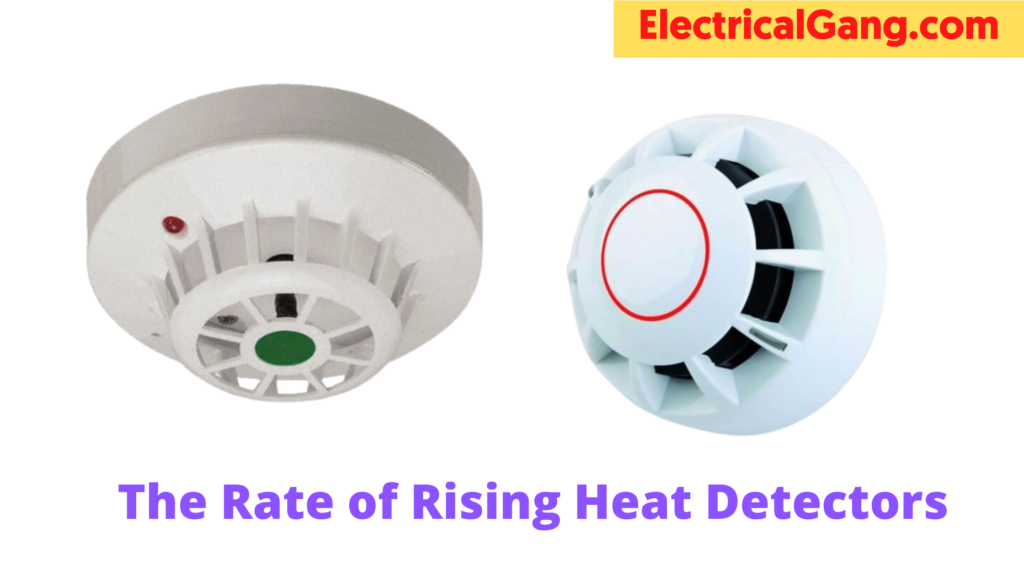 Contact Temperature Sensor Types–These types of sensors are widely used to detect liquids, solids, or gases. The temperature sensor needs to be physically in contact with the object. And it uses conduction to monitor changes in temperature.

Non-contact Temperature Sensor Types–This type of sensor uses temperature sensor radiation and convection to monitor changes in temperature. These types of sensors are used to detect gates and liquids that emit radiant energy, which is transmitted in the form of infrared radiation. 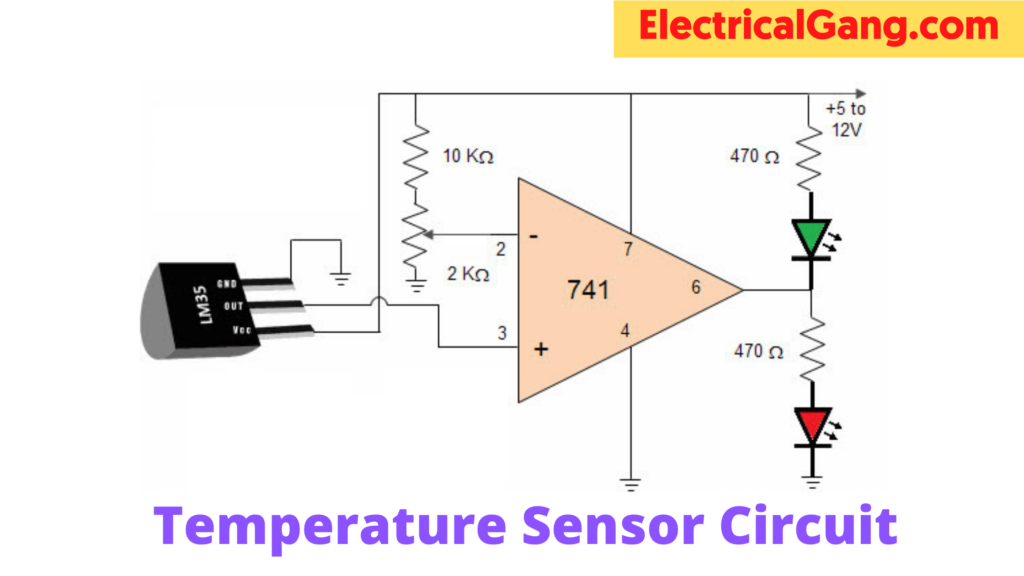 The linearity of the IC sensor with the opposite accuracy from the thermister has very good accuracy at 0.5°C and a sufficient range of temperature. Its output is comparable to Celsius temperature. The IC temperature operating range is -55° C to + 150° C.

It draws just over 50 µA from its supply, and the main characteristics are self-heating and <0.1 degrees centigrade in air. The IC operating voltage ranges from 4 volts to 30 volts, and the output is 10mv°C. In this circuit, the voltage can be set to IC pin 2 using a potentiometer. The circuit can be designed to activate or deactivate the device at specific edge temperatures. Temperature can be indicated using two LEDs called green LEDs

If the output temperature of the secondary exceeds ten mV, then this changing voltage is the supply of the IC 741 OP amplifier. This is mostly used in integrated circuits. It has two terminals. Such as inverting (input (-)), and non-inverting (output (+)). The 741 op-amps are used as an amplifier in this circuit. This means that the input pin is pin-3, and the Output pin is in. This circuit widens the gap between its input terminals.

The advantages of temperature sensors are as follows:

The different types of Heat Detector Tester are as follows:

This detector uses smoke test aerosol and solo aerosol. This ensures that the detector will not leave any residue and will not be filled with particles. A simple shot blast is enough to set the detector to make an alarm sound. Using the Solo 200 Removal Tool, the detectors can be removed and operated.

Solo 330 Smoke Dispensers are light in weight and easy to use, and strong. The Solo 330 is primarily made for the purpose of increasing use with the Solo Aerosol. The swing frame and injection molded construction make it an ideal tool for testing. The Solo 330 has features.

The infrared beam is broken with the help of this detector to activate heat generation. Direct is directed into the sensor of the detector. For added security, it shuts off after 5 minutes.

An IC Temperature Sensor is a two-terminal integrated circuit temperature transducer that produces an output current proportional to absolute temperature. The sensor package is small, with a low thermal mass and a fast response time. The most common temperature range is 55 to 150°C (-58 to 302°F). 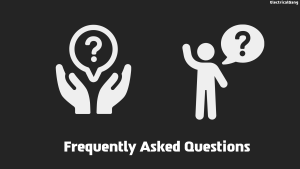 What Is Heat Sensor Circuit?

A heat sensor circuit typically includes a heat sensing component thermistor, which works similarly to a resistor and changes its resistance upon sensing heat, a variable resistor, a transistor, a buzzer for alarming, and a capacitor. This circuit can be used for various purposes.

How Do You Make a Temperature Sensor Circuit?

The components you need to make a temperature sensor are a 9V input DC supply DC, a 10KΩ thermistor, a BC547B transistor, a 6V relay, a 1N4007 diode, and a 20KΩ variable resistor. This circuit can be operated with a 9V battery, adapter, or transformer.

What Are the 2 Types of Temperature Sensors?

There are currently four types of temperature sensors in the market, which are most widely used in electronics nowadays, which is something like this. Thermocouples, RTDs (resistance temperature detectors), thermistors, and semiconductor-based integrated circuits (IC).

Where Are Heat Sensors Used?

This circuit is used in many electrical devices in all of our homes, such as refrigerators and freezers, to help control and maintain cold temperatures, as well as to ensure that stoves and ovens are heated to levels required for cooking and air confectioners/heaters.