Hello friends, today we are going to talk about HRC Fuse, its construction, its working principle, and its type and use.

There are so many types of fuss in the market today we have to talk. The construction of the HRC fuse is about its working principle and its type and use.

What is an HRC Fuse?

Definition: The HRC fuse whose full name is the High Rupturing Capacity fuse is similar to a normal fuse in which the fuse wire carries a short circuit current up to a certain limit. If the flow exceeds this, it burns. HRC fuses are made from glass or some other type of chemical compound.

The fuse is tightly closed to prevent atmospheric air from entering it. The ends of the fuse are made of ceramic metal caps which are attached with flexible silver wire. There is a large amount of space on the inside of this which is around the wire otherwise the element of the fuse.

The HRC fuse is uniform, has the feature that it has very low tripping time if it has a high-pressure current. Similarly, if the fault current is not high, the break time is long.

The HRC fuse is made of a material that has a high heat-resistant body like a ceramic. Metal-end caps are added to this ceramic body. Which is connected by an element carrying a silver-current. 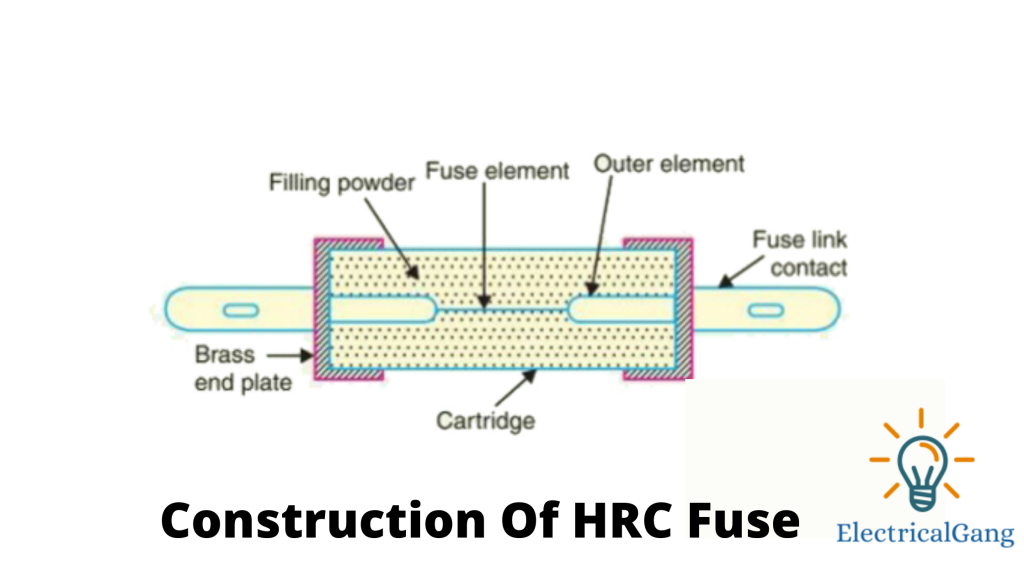 The inside of the fuse body is filled with powder which contains the materials used such as quartz, plaster Paris f Paris, dust, marble, chalk, etc. Noise Causes The essence cannot overheat within the current. The heat generated evaporates the dissolved element.

The chemical reaction will take place between the filling power and the silver vapor, resulting in a high resistance material to help reduce the arc inside the fuse. Copper or silver is usually used in fuse due to their low resistance. A fuse element usually has two or more sections that are connected with the help of a tin.

Under normal conditions, the current does not generate enough heat to dissolve it. If more current passes than its limit the fault current melt the element of the fuse before it reaches its climax. When the fuse is in an overload condition the fuse ingredient does not melt but if such a condition lasts for a long time then a material like eutectic will melt and break the fuse element.

The thinner parts of the fuse element melt faster in a smaller area when the fuse is in a short circuit condition. And it will break before the eutectic material. HRC, therefore, has reason to provide limitations within the element of the fuse.

Also Read: What is Fuse | Types Of Fuses | Working Principle of Fuse | Application Of Fuse

There are usually 3 types of fuses that are listed below:

Its cleaning capacity is best for perfect with short-circuit act. Used in air and mining, feeder partitioning, gas-insulated switchgear, and transformers.

This type of fuse is also known as plug I. The fuse is available with a plastic body and two metal caps to set in the socket. It is used in cars to protect against short circuits, wiring, and motors for backup protection.

A fuse works after the element dissolves due to the heat generated by the I2RF in which the RF blocks the fuse. If the current exceeds the capacity of the fuse, its heat also increases.

Therefore, in the state of more current, the fuse melts faster. Thus, the relationship between the time-current of the fuse is named as the fuse characteristics. For proper selection of fuse, it is very useful for a particular circuit.

The Advantages of the HRC fuse are as follows:

The disadvantages of the HRC fuse are as follows:

The Application of the HRC fuse is as follows: