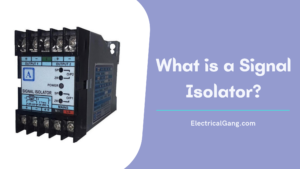 The reliability of the signal can be achieved by two essential parameters such as high-quality equipment as well as a good measurement. Sometimes if the equipment cannot be installed properly, the signal may be of poor quality. A signal isolator or conditioner is used to protect the equipment to eliminate such a problem.

This isolator is a good combination of frequency response, signal handling, and accuracy. Some isolators are suitable for two-way field communication which can be obtained by the superposition of digital communication. In today’s article, we will see what is a signal isolator? Today we will discuss in detail what is the working principle of signal isolators and what are its types.

What is a Signal Isolator? 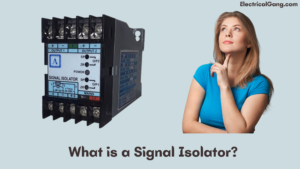 We can define a signal isolator as an electrical device. Which is used to eliminate earth loop errors. Which is caused by the problem of noise and signal interference. This isolator uses many electronic methods to interrupt two ground connections while passing a precise signal with accuracy or with a small loss.

The signal isolator maintains electrical isolation in the input and output circuits. The signal can be connected to the output with the help of a transformer. This isolator also breaks the direct electrical path between the loop ends. They protect against dangerously calculated variable voltages and increase protection from spikes and surges.

The working principle of the signal isolator is similar to that of the signal converter and signal interface. This isolator is often used for split, share, step down, protection, linearized, boost, and process signal digitization. Its main function is to divide the electric (galvanic) lane into potentials separate from the ground in the circuit. An electrical lane can be defined as a lane where there is a direct electrical link between the electrical circuits that allows an electric current to flow.

The function of a signal isolator can be performed in two ways, analog and discrete. Analog signal isolation involves isolation transformers for cutting, isolating, and recreating signals.

While separate signal generation is used to cut, optically transmit, and reproduce the signal. This different technique is called optoisolator when a signal isolator is used. The choice of these two methods can be made based on the need of the circuit.

The signal isolator provides electrical (galvanic) isolation between the input and output circuits. It connects the output signal through a transformer or optical isolator. The signal isolator also breaks a direct electrical galvanic path between two or more loop points. It provides protection against dangerously measured – variable voltages and increases protection from surges and spikes.

The signal isolator is closely related to the signal converter and the signal interface. These devices are used to split, amplify, step down, linearize, secure, and digitize process signals. The most important role of the signal isolator is to break the galvanic path between circuits to have ground for different potentials. Galvanic paths are defined as paths. In which there is a direct connection between two or more electrical circuits that allow current to flow. 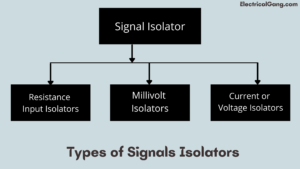 Signal isolators are classified into different types, some of which are as follows:

These types of isolators are used as strain, RTD, slide wire, and potentiometer transmitters.

These types of isolators are used as millivolt transmitters and thermocouples.

This type of isolator is used for alarm tripping, deviation alarm notifications, and other specific types of application transmitters.

The application of signal isolator is as follows:

Signal isolators are used in industrial, medical, and other environments that require electrical isolation for safety. This isolator horn can also be used to amplify the signal, enable equipment to be added to an overburdened loop, or lower a dangerous, high-voltage signal to a safe level.

1. Which principle is used in isolator?

An isolator uses a transversely magnetized ferrite junction to direct incoming microwave energy. When the signal enters the device it travels in the direction of a flowing magnetic field. Thus the signal can be directed to the port at will on the device.

2. What are isolators used for?

An isolator is a device used to separate a circuit or other equipment from a power source. Such an isolator is a mechanical switching device, which allows separating the input and output of the device in the open position.

3. What is a signal converter used for?

4. How do I connect a signal isolator?

The signal isolator maintains electrical isolation in the input and output circuits. The signal can be connected to the output with the help of a transformer. This isolator also breaks the direct electrical path between the loop ends. They protect against dangerously calculated variable voltages and increase protection from spikes and surges.