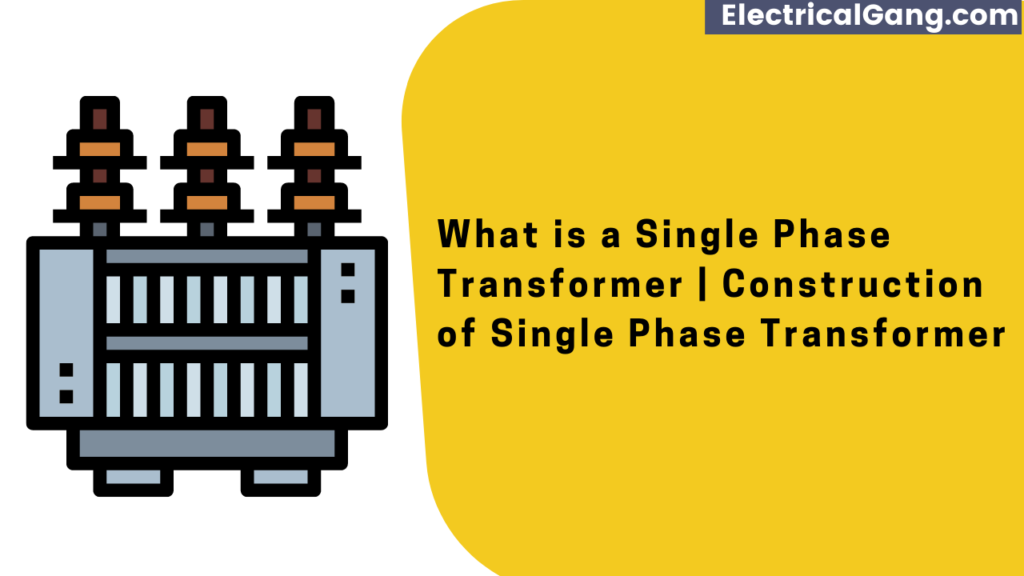 This is used as a step-down transformer to reduce the voltage to the right value for a home without changing the frequency function. For this reason, it is commonly used to power electronic devices in residences. In today’s article, we will see what a single-phase transformer is, why this transformer is constructed and we will talk about its complete overview today.

What is a Single Phase Transformer? 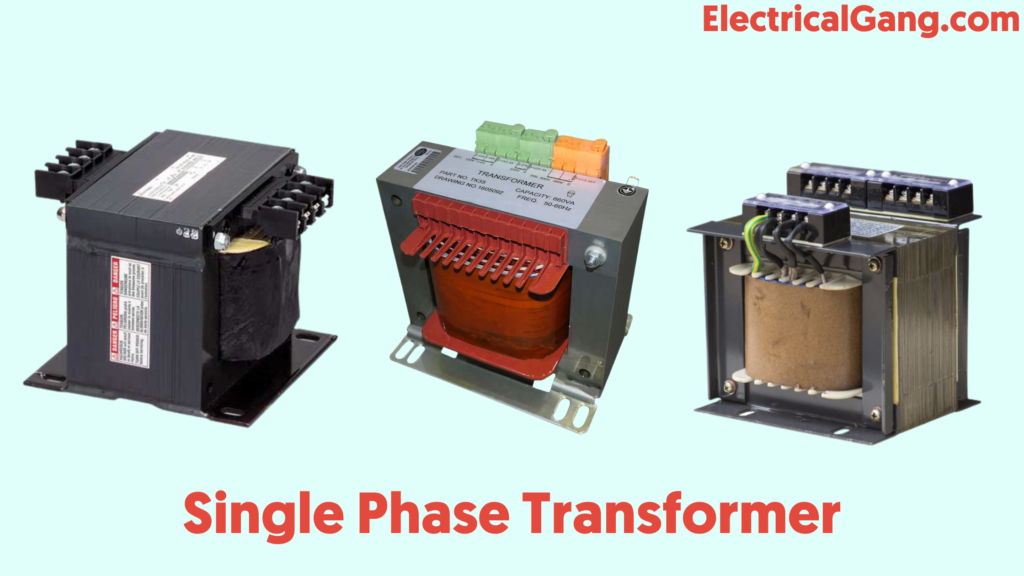 A magnetic iron circuit called the core is usually used to wrap around this coil. Although these two coils are electrically separate, they are magnetically connected to each other.

The single-phase transformer works on the principle of Faraday’s law of electromagnetic induction. In particular, the mutual induction between the primary winding and the secondary winding is responsible for the operation of the transformer in the electrical transformer.

In a typical single-phase transformer, each winding is cylindrically wrapped around an iron limb to provide an essential magnetic circuit. Which everyone calls “Transformer Core“. Between these two windings provides a path for the flow of a magnetic field to induce a voltage.

The two windings are not close enough to each other for efficient magnetic coupling as shown in the figure. Thus converting and amplifying the magnetic circuit near the coil can increase the magnetic connection between primary and secondary. Thin steel laminations will be in operation to prevent power loss from the core.

How the winding is wrapped around the central steel laminated core. Based on this, transformer construction is divided into two types. One is a core type transformer and the other is a shell-type transformer.

To increase the magnetic attachment in such a transformer, only half the windings are cylindrically wrapped around each leg of the transformer. Whose figure is as follows. This type of construction ensures that the magnetic lines flow simultaneously in both windings. The disadvantage of this type of transformer is the leakage flux caused by the small force flow of the magnetic line outside the core. 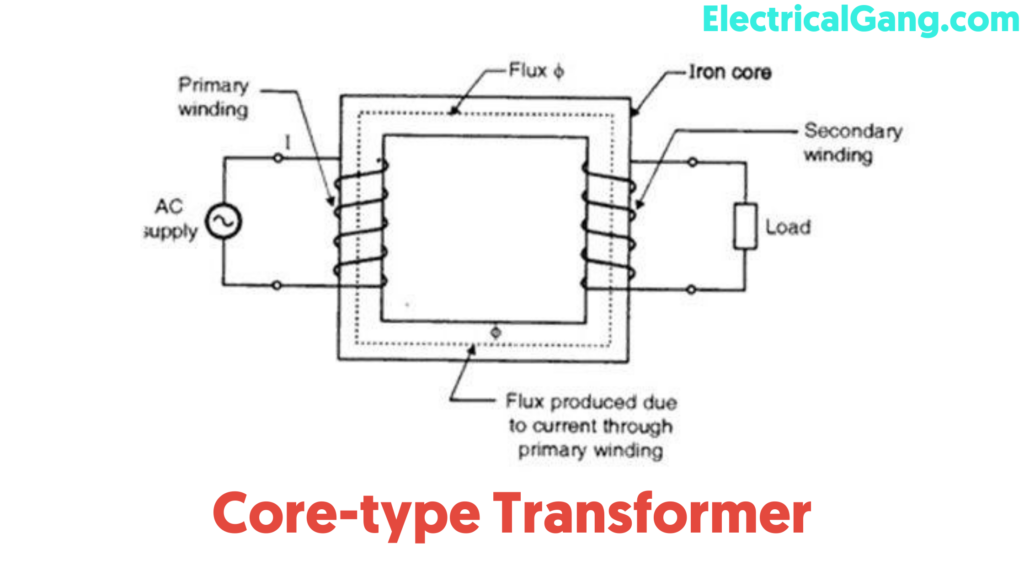 A transformer is a static device that has no moving parts like a motor. Electric power is transferred from one circuit to another with the same frequency in the transformer. This transformer consists of primary and secondary windings. This transformer works on the principle of mutual inductance.

When the transformer is connected to the primary AC supply current flows in the coil and creates a magnetic field. This situation is known as mutual inductance. And the flow of current is according to Faraday’s law of electromagnetic induction. As the current increases from zero to its maximum value. As the magnetic field becomes stronger and dɸ/dt. Is represented by.

As the magnetic lines of flux flow around the core. So it passes through the secondary winding and induces a voltage around it. Faraday’s law is used to determine the induced voltage in the secondary coil and is given by:

‘N’ is the number of coil turns.

From this, we can say that Voltage induced are similar in both windings. This is because the same magnetic flux works to connect these two coils together. Also, the total voltage is proportional to the number of direct turns in the induced coil.

Due to the AC supply, the magnetic flux changes sinusoidally and is given by,

The relationship between the induced emf, E in the coil winding of n turns is given by,

‘N’ is the number of coil windings.

‘ɸ’ is the amount of flux in Webers.

Some applications of single phase transformer are as follows: 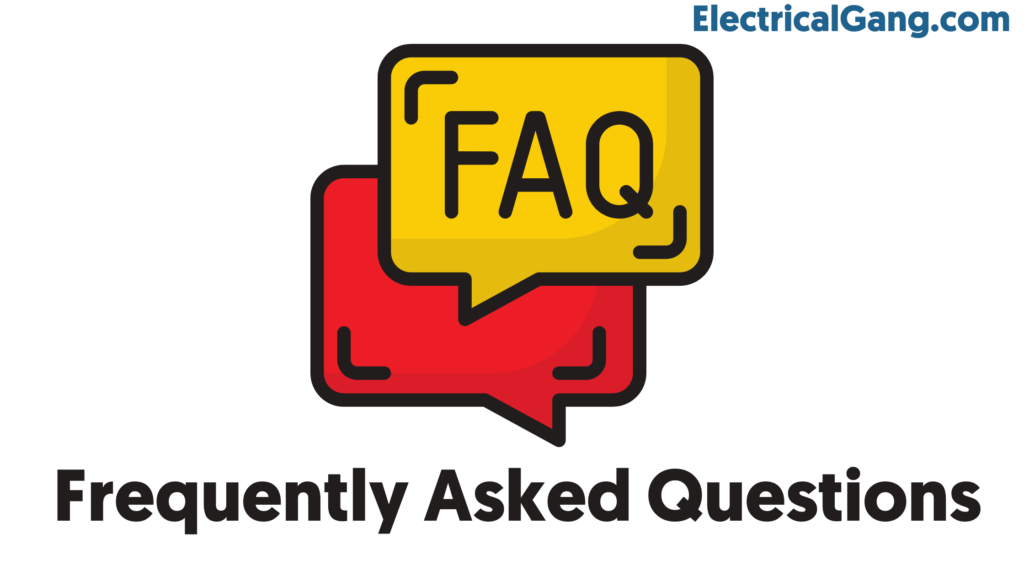 1. Where are single-phase transformers used?

Single-phase transformers are mostly used as electronic devices in commercial low voltage applications. It acts as a step-down voltage transformer. And reduces the home voltage value to the appropriate value to supply electronics.

2. What is the working of a single-phase transformer?

3. What are the parts of a single-phase transformer?

There are three basic parts of a transformer:

4. What is the transformer “Turns Ratio”?

5. What are the applications of single-phase Transformers?

Some applications of single phase transformer are as follows: