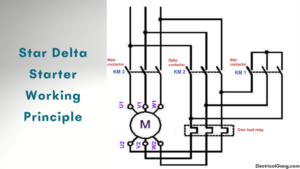 The star-delta starter is usually used to start an induction motor. Initially, when the motor starts it rotates in star connection and once it reaches a fixed speed it converts to the delta.

3 methods have been used to start the induction motor. One of them is the DOL starter i.e. direct online starter but the use of this starter is limited only a small horsepower motor can be operated by this. But for large class motors, semi-automatic star delta starter, fully automatic star delta starters has been used. In which 6 terminals are used.

In this article, we will see which parts are used in this way. He has a theory. And discuss its diagram and its working method.

Thus a decrease in starting torque is observed due to the reduction of high current. This flow is perfect for Star Delta start drives. After the arrival of such a starter, there is no question of overload. Thus, the initial time is long. 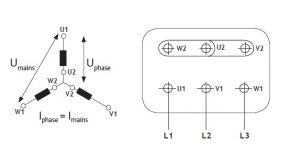 The star stays close to the contactor and the star contactor at the beginning of the delta and completes the full power circuit.

The motor is initially connected to the star after supply. The connected state voltage on the star is applied to the motor, reducing up to a third of the winding voltage. When the motor operates at its full load. Then the full circuit is connected and 90% of the timer is activated. Which causes the star to leave the connector and convert to the delta. This means it’s about to be the most delusional time of the year, as well.

The circuit opens when the motor is rotated from star to delta. And the time motor neither stays in the star nor in the delta from this situation is called an open transition state.

After activation of the timer, the motor is switched from star to delta. In the case of delta connection, phase voltage and line voltage are equal. So the line voltage is applied across the winding of the motor so the motor starts working across its full load.

The control circuit wiring diagram in Star Delta Starter uses a push-button for the timer, start and stop. 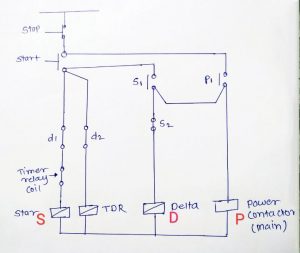 After pressing the push button at the beginning, the single-phase supply turns on the timer which causes the timer contact to be closed 17-18. And normally the contact starts.

This type of process causes the star contactor to turn on and the motor to turn into a star. After a while, the motor converts from star to delta after reaching 90% of it. Due to this line voltage is applied to the motor and the motor starts rotating at full power. 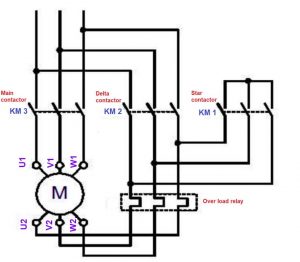 The Theory of working is as follows:

1. What is the star delta starter?

The Star Delta Starter is used to start a three-phase induction motor which is the most popular method in the market. Starting an induction motor in the Star Delta connects to the Star Connection throughout the period. And we use this starter to reduce the initial flow of any external tool or device except the work

2. Why is the star delta starter used?

The star-delta starter is the most common reduction voltage starter. It is used in an attempt to reduce the initial current applied to the motor at start-up as a means of reducing interruptions and interference to the power supply.

3. Which is faster Star or Delta?

4. Can we run Delta motor in Star?