Home » What is Earthing And Types of Earthing 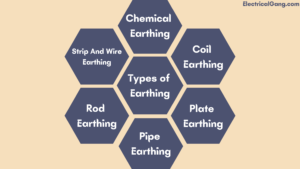 How The Earthing System Works:

We can understand this very easily.

Example: Anyone is a motor. Understand that we have not earthed it and there is an electrical fault in this motor. Will pass through the body and suppose this time someone touches the body even by mistake then he feels terrible grief.

But if we had earthed the body properly, this current would have easily gone into the ground with the help of earthing wire.

Why Don’t We Feel Current By Doing Earthing?

There is no rule for the current to pass through the low resistance side. Our body’s resistance is 1000 ohms or more.

How Earthing Is Done:

Earthing is a very simple task involving the body of a motor or any equipment attached to the ground,

Understand By Example: We know that the body of a motor is made of a substance like iron or steel. To do earthing, we attach this body to the ground. If a fault condition touches the body of the motor, then the current will go to the ground with the help of this earthing wire instead of going through the body.

Also Read: What is Earthing | Difference Between Earthing and Grounding

Earthing is usually done in 6 ways which are as follows:

Strip and Wire earthing This etching is done in a place where the ground is rocky, which means there is more rock in the ground. This earthing is widely used in long-distance transmission lines.

This type of earthing is done by digging very deep in the sandy area as the moisture content is high across the sandy place. That’s why we use Pipe Earthing in this.

This is the most commonly used earthing in which we put a pipe 5 to 10 feet into the ground.

Coil earthing is used in the smallest amount. This earthing uses a coil made of G.I wire. Such earthing is mostly used for electric poles.

What should be the earthing resistance?

Earthing is used to protect us and our equipment. The lower the resistance of the earth, the better. The best earthing is 0 ohms, but this is not possible.

Earthing resistance of power plant. 0.5 ohms or less is kept

The earthing of the L.T pole is kept at 5 ohms or less.

The air resistance of the house is considered to be 8 ohms or less.

How to reduce Earthing resistance:

1. Maintain Moisture of earth: Water is used to retain soil moisture, so water is poured into the earthing point from time to time.

2. Increase Contact Area of ​​Electrode: Earth resistance can also be maintained by increasing the thickness of the rod used in earthing.

3. Increase Depth of Electrode: Earth resistance can be reduced even if this electrode is placed at a greater depth while earthing.

4. Use of Salt and Coal in Earthing: Salt and coal can be applied to the place where the electrode is inserted in the soil to maintain soil resistance for a long time.

What is earthing, and what types of earthing?

Earthing is usually done in 6 ways which are as follows:

What are the 5 Earthing Systems?

BS7671 lists five types of earthing systems  TN-S, TN-C-S, TT, TN-C, and IT. T means (from the French word Terre) N = neutral S = isolated C = composite, I = isolated (the source of the IT system is either connected to the earth by an intentionally introduced earthing barrier or separated from the earth.

What are the two types of grounding?

There are two main types of grounding, which are as follows:

Grounding of an electrical system is completed only when one conductor of the circuit is intentionally connected to the earth.

What are the three main Earthing Systems?

The IEC 60364 standard has defined three types of Earthing Systems, namely TT, IT, and TN systems.

How many types of neutral earthing are there?

There are five types of neutral earthing:

Methods of Earthing or Earthing Types:

What Is Meant by Earthing? Explain Different Types of Earthing?

Electrical earthing is done by connecting the non-current carrying part of the equipment or by neutralizing the supply system to the ground. Mostly, galvanized iron is used for earthing. Earthing provides an easy path for leakage current.