Home » How to Turn Off a Fire Alarm? | Simple Guide 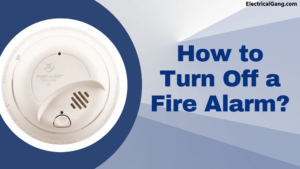 The commonly experienced problem among all those who have a fire alarm is a false smoke alarm. We’ve all encountered smoke detectors that set off the alarm. It usually starts after sleeping.

The beeping starts for no reason and startles you out of your restless sleep. And when you feel that you are sleeping safely, the constant noise starts again. It is fairly enough to enthrall you. The main reason electrical devices die unexpectedly is that people don’t change their batteries often enough. In most sensors you can think of, the signal strength increases when it sees something it is supposed to detect.

However, most smoke detectors are designed to turn off when the current drops. This can be a result of the smoke within the air reducing because the battery discharges. As the battery discharges, the current through the sensor also decreases. So you can get bad results. Many reasons and situations can cause this, but most users don’t know how to turn off the fire alarm. In most cases, a battery issue is the cause, and there is a way to stop the beep. Here are the detailed instructions and steps to turn off the alarm.

How To Turn Off A Fire Alarm?

Remove the battery from your fire alarm and hold down the reset button for at least 20 to 30 seconds. Now reconnect the battery and the fire alarm. It will most likely beep once as proof that it is working, then it should stop.

Reasons For The Fire Alarm To Turn On By Itself: 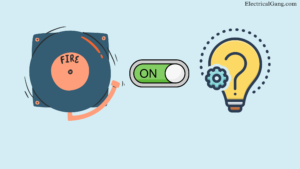 There may not be many reasons for a fire alarm to beep on its own; there might hardly be a few reasons, which are,

These are the most common reasons causing a fire alarm to go off on its own; let us discuss them all briefly to be safe from such incidents. 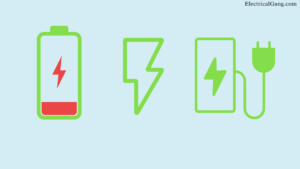 There are many kinds of fire alarms, but hardwired and stand-alone are the most used fire alarm systems around the world. Many fire alarms use such a feature, such that it beeps out on its own when the capacity of the battery is low.

Both types of fire alarms go off after every minute or other to alert you about the batteries being weak. This sound could be creepy and may cause you problems, though you can easily solve this issue by replacing the old batteries with new ones.

2. Too Close To Steamy Or Hot Areas: 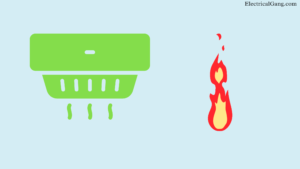 The most common reason for an alarm to beep would be to get a false warning from a close by steamy or hot place such as a kitchen or bathroom. If alarms are set near the bathrooms, which contain hot showers could cause problems with the alarms and may set them off on their own due to the presence of steam from the showers.

The alarms often go on by themselves due to heavy substances in the air, such as steam and other heavy compounds like smoke. The steam causes the blockage of current in the alarm same as that the smoke does to the alarm. The same goes for the alarms present near the kitchens due to heat and steam caused by cooking or boiling.

This is a very less known reason as some years before; the fire alarms were not as sensitive to volatile compounds compared to the new ones. These compounds or chemicals, also called thinners, are most commonly used in paints to keep them wet while they are in their containers, though it helps in reducing the time they dry out on the wall.

Nowadays, fire alarms are made sensitive to such risky and volatile compounds because they are highly inflammable and may cause a fire inside the place they are used. The sensors used in fire alarms in recent times are more tentative to such volatile substances than before for more security. In such a problem, you need to keep the paint containers that have the thinners away from the alarms to prevent them from turning on.

4. Dirt Could cause Alarm Beeping:

As discussed before, the new age fire alarms are made more sensitive to any kind of substance heavier than air. In this case, comes the dirt present in hallways and open rooms. The most common reason for a fire alarm to go off on its own would be dirt and cobwebs, which are found anywhere and everywhere in the world.

The sensors are made of photoelectric and ionization sensors; these are one of the most sensitive detectors used for the betterment of security. These kinds of fire alarms are used to get better results, though they have a flaw which is they are too sensitive to any kind of substance heavier than air.

Ways To Fix The False Bleeping Of Fire Alarms:

There may be many ways to fix a beeping fire alarm, though many may be not be used for all the problems, you could try many ways, but before that, you need to be sure that the fire alarm is giving false beeping due to,

The ways to deal with false alarms are,

These are the most important and well-known ways to solve problems caused by fire alarms. Let us discuss them briefly and get to know them completely.

1. Turn On The Silence Button On The Fire Alarm: 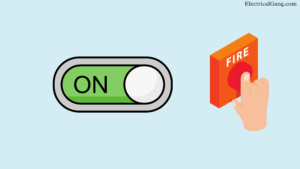 As we know, there are mainly two types of fire alarms used across the world, which are Standalone and Hardwired. These are mainly used because of their simplicity and can be easily used by anyone, so there are features and buttons on the fire alarms which can be used to your advantage.

In the case of a fire alarm that is turning on by itself, there is a button called the silence button, which is used in such a case where you need to silence the fire alarm as it might be quite a headache to hear.

It can be solved by the silence button used to quiet out the fire alarm to stop it from beeping; this feature or button is most commonly applied to newage or the standalone fire alarm. 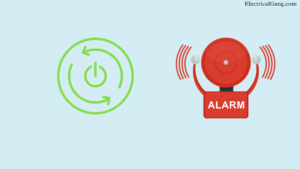 The easiest and most effective way used to chop up the fire alarm turning on its own would be resetting the fire alarm using the below-given details. As we discussed in the article, there are about two types of majorly used fire alarms: Standalone (DC) models and Hardwired(AC) models.

In common cases or many fire alarms, the resetting button is to be found or is located in the center of the fire alarms’ front side. Let us take it one by one for each of the types of fire alarms and follow the steps given below,

In the case of a hardwired model, they use a breaker circuit system that can also be used to stop the use of high and continuous alternating current. To stop the fire alarm from beeping, you need to do the steps given below.

Almost the same goes for the standalone models, though the difference would be there are circuit breakers, and they could also be wireless and could help you save some electricity from the hassle of wires.

3. Regular Testing Of The Fire Alarms: 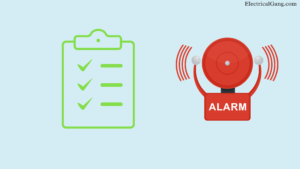 For a fire alarm to be in a good state, it needs to be tested on a regular basis of time to make sure it is working properly. The testing is done using a button present on the front of the fire alarm.

The ‘test’ button is held for about 5 to 8 seconds till it makes a beeping noise or the alarm is set off to indicate that the fire alarm is working properly. If there is more than 1, or an interconnected network of fire alarms, then all would go on at the same time; this could be a kind of headache too.

How to Turn Off Smoke Alarm Without Battery:

How to Shut Off Fire Alarm System:

Remove the Battery from Your Fire Alarm and Hold Down the Reset Button for at least 20 to 30 Seconds. Now Reconnect the Battery and the Fire Alarm. It Will Most Likely Beep Once as Proof That It Is Working, Then It Should Stop.

How to Turn Off Adt Fire Alarm Beeping:

For Many of Our Popular Systems, Beeping Alarms and Low Battery Trouble Beeps Can Be Silenced by Pressing the [Off] or [#] Buttons from the Keypad.

How to Turn Off Fire Alarm at Home:

Remove the Battery from Your Fire Alarm and Hold Down the Reset Button for at least 20 to 30 Seconds. Now Reconnect the Battery and the Fire Alarm. It Will Most Likely Beep Once as Proof That It Is Working, Then It Should Stop.

How to Turn Off First Alert Smoke Alarm:

If Your First Alert Alarm Is Sounding and It’s Not an Emergency, Use the Silence Button.

How to Make Your Fire Alarm Stop Beeping:

How Do You Shut Off a Fire Alarm:

Most smoke detector and fire alarm models on the market today include a “silence” function. Pressing this will stop the beeping. If smoke detectors and fire alarms continue to pick up smoke even after some time has passed. Then the beep will start again to ensure your safety.

How to Turn Off Hard Wired Smoke Alarms:

Many people find this work difficult. Can I remove a hardwired smoke detector if you ask yourself this question? So the answer is yes, you can do this. To stop a hard-wired smoke detector from beeping, you must disconnect it from a fixed location and remove the battery. 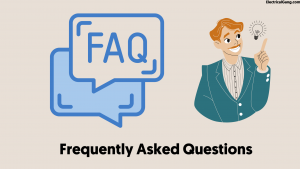 How Do I Stop My Fire Alarm from Beeping?

Can You Manually Turn Off a Fire Alarm?

You can turn off the fire alarm manually by pressing and holding its silencing button. However, we do not recommend removing the device or battery for this.

How Do You Silence a Fire Alarm in an Apartment?

Manually pressing and holding the “silence” button on a smoke detector or fire alarm silences the sound but does not turn it off permanently. On older models, you may need to remove the alarm screw from the wall or ceiling and hold down the back button.

How Do I Stop My Fire Alarm from Beeping Every 30 Seconds?

Chipping every 30 to 40 seconds by your fire alarm is a sign of a low battery. If your smoke or heat alarm has a replaceable battery, try replacing the battery with a brand-new one. It is recommended that you replace your smoke and heat alarm batteries every 6 to 8 months.

There might be other problems too, such as no response from the fire alarm due to unknown reasons. In such a case, you need to follow these conclusive steps.

Let us analyze them for a better understanding:

In this case, it is as says you need to contact the fire control panel or the company which has set up the fire alarm if there is any problem with the fire alarm.

Again the name itself suggests the problem might be in the old fire alarm, which can be easily replaced with the help of the fire control panel or any of the company fire alarms you would like to buy.