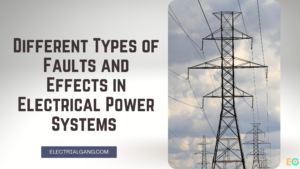 Hello friends, in today’s article we will find out how many types of faults can occur in the power system and what could be the cause of these faults and how to prevent them. 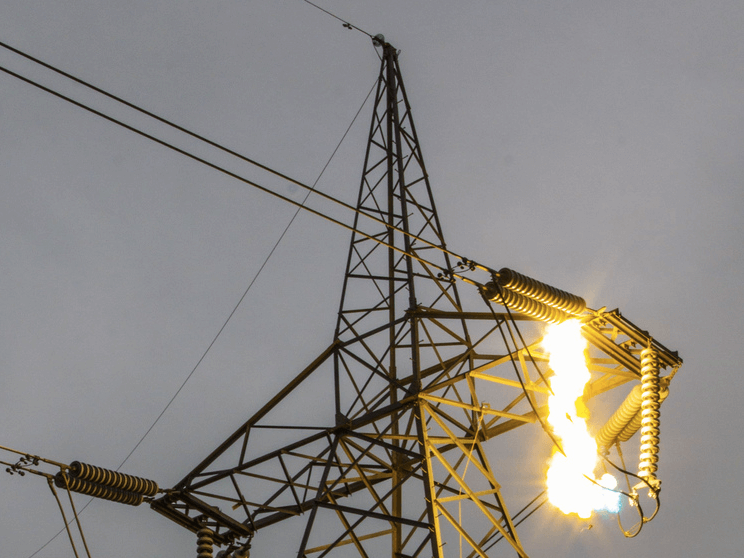 The complexity is increasing day by day in all sectors of the electrical energy system such as power generation, transmission, distribution, load system of electricity. Defects such as a short circuit in the power system can result in huge losses and reduce the reliability of the electrical system.

Defects in the electrical system are an uncommon occurrence caused by the failure of devices such as transformers and rotating machines, human errors, and environmental conditions. Electrical faults disrupt the flow of electricity, resulting in damage to appliances and the untimely death of humans, birds, and animals.

Mainly electrical power system has 4 types of faults which are as under.

In normal conditions, the flow of electricity in the power system is easy due to which all the equipment are working properly. But if a system fault occurs, it causes a large amount of current to be transmitted from the system which can damage the device running through it.

Defective equipment must be used in the power system, or a major mishap may occur. Defective equipment such as switchgear equipment, electromechanical relays, circuit breakers, and other protection devices need to be detected and analyzed to select or design.

In short, a short circuit is any combination of two points or two phases, whether it is for any purpose or by accident. This is known as a short circuit fault. This is a small but very serious type of defect. As a result, more current is transmitted to the device or transmission line for a while.

If any device is turned on for a while in such a condition, the device can be extensively damaged. A short circuit fault is also known as a shunt fault. 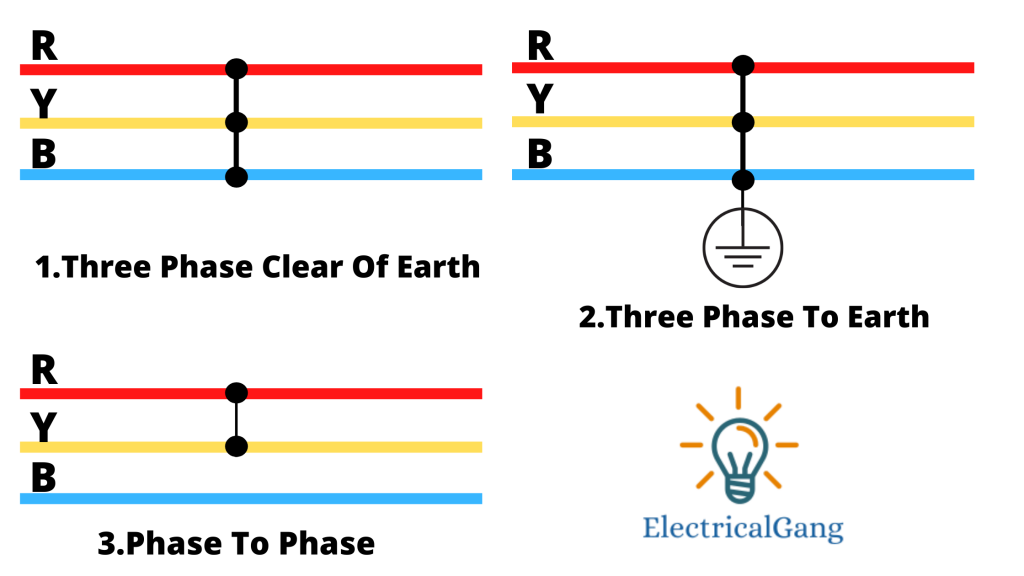 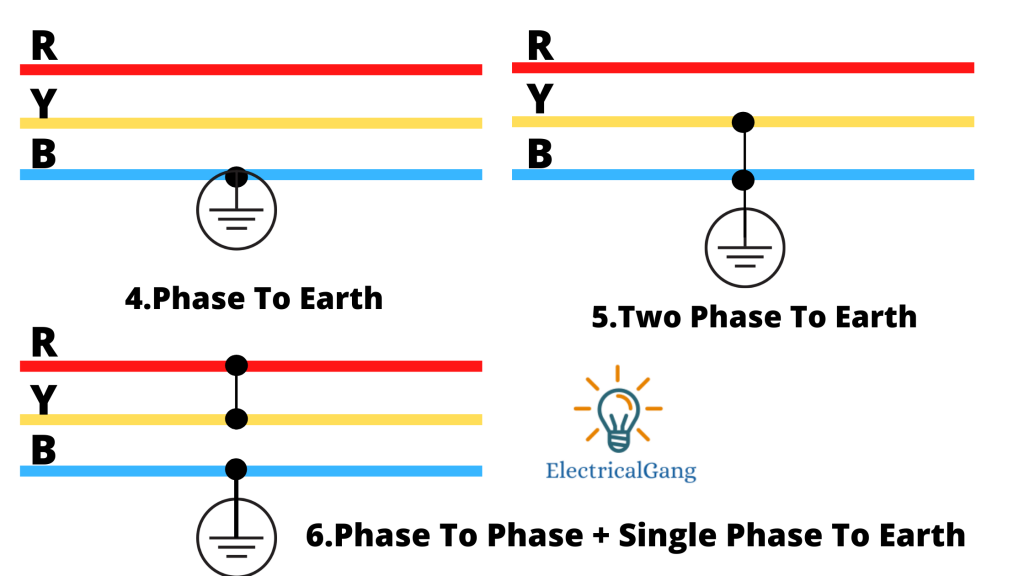 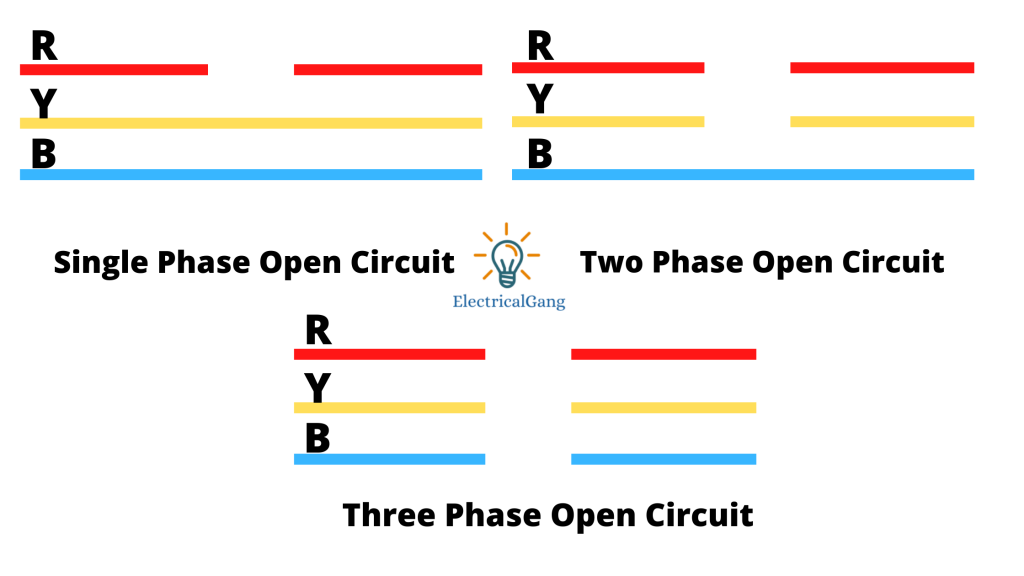 Thus, apart from the three-phase open circuit, there are two other types of faults which are called asymmetrical or unbalanced faults. Thus keep in mind that the transmission line operates with the first balanced load of the open-circuit fault.

Thus single-phase, two-phase open-circuit conditions create an imbalance of voltage and current in the electrical system, which causes a lot of damage to the devices.

These are of two types, such as a line to ground (L-L-L-G) and line to line (L-L-L). Electrical fault This type of defect is found in only 2 to 5%. If such a fault occurs then the system remains balanced.

But the device of electricity is severely damaged. 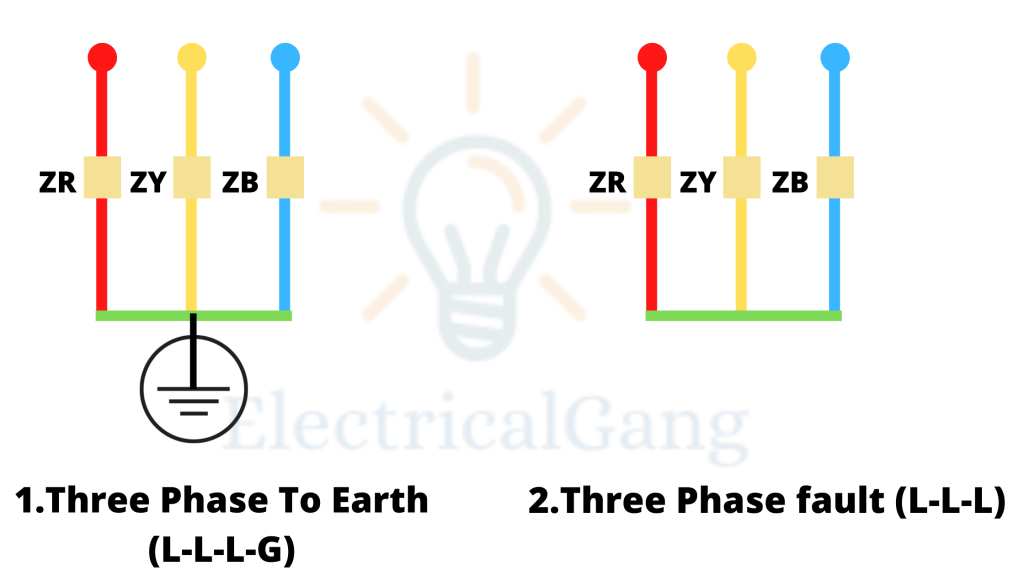 The figure above shows two types of three-phase symmetrical defects. The analysis of this defect is simple and usually on a phased basis.

To select a set-phase relay, the breakage capability of the circuit breakers and the rating of the protective switchgear require a three-phase fault phalanx analysis or information. 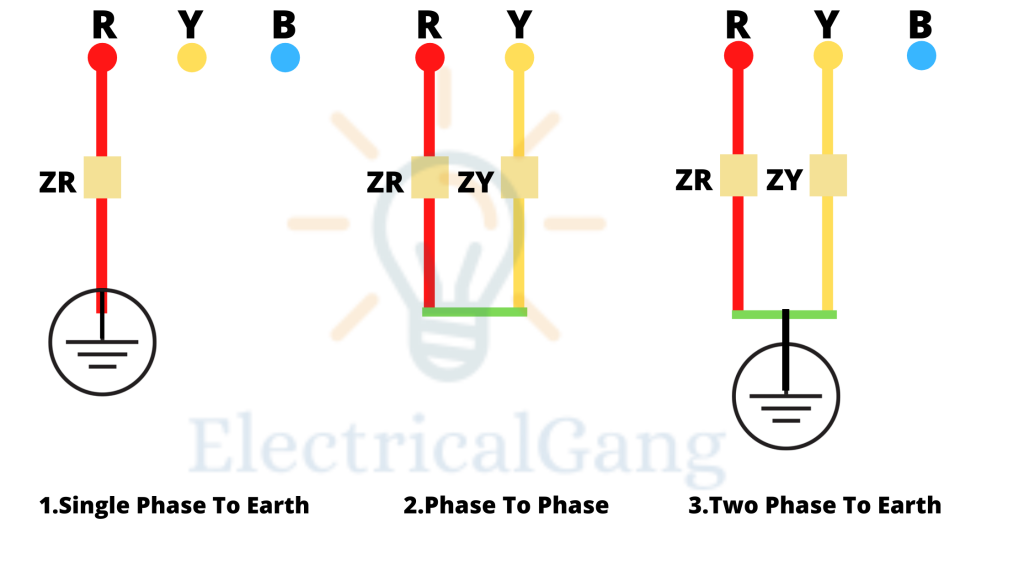 Such faults are more common and less severe than symmetrical faults.

There are mainly 3 types of Unsymmetrical Faults which are as under.

Line-to-line faults occur when two main conductors come in contact with each other due to air pressure. The proportion of such faults is 5 to 10%.

This type of defect can also be called an unbalanced defect because it causes an imbalance in the system. An imbalance of the system means that the barrier values ​​are different in each phase, causing the imbalance current to flow in the phase. This is more difficult to analyze and is run on the same phase basis as the three-phase balanced defect.

There are 4 main causes of electrical fault which are as under.

Due to the lack of electricity in the weather, heavy rains in the monsoon season, extreme winds in the cold season, snowfall, etc., can cause damage to the transmission line and disrupt the power supply. Such natural conditions can cause damage to electrical installations.

Short circuit faults occur due to various electrical equipment such as transformers, generators, motors, switching devices, insulation defects of cable over time, and winding. Such a defect results in high current flowing through the device or apparatus which damages it.

Electrical system Some errors are also caused by man. Such as selection of improper rating of devices, forgetting of metal or electrical condensing parts after servicing or maintenance, switch off of the circuit when charging circuit, etc.

Ionization of air due to smoke particles, resulting in a spark between the lines or conductors towards the insulator around the overhead lines. Insulators lose their insulating capacity due to the high noise caused by this flashover.

Electrical power systems can be repaired by preventing human errors when natural weather conditions are not in human hands and cannot be prevented. So if we separate the circuit from the main power in case of fault formation, we can prevent a lot of real damage. Some of these fault limiting devices include fuses, circuit breakers, relays, etc.

Fuse is a primary safety device that is a thin wire enclosed in a casing or glass that connects two metal parts. This wire melts when more current flows in the circuit. The type of fuse depends on the voltage on which it will operate. It is necessary to replace this wire once it is burnt.

These include Lightning Arresters and grounding devices that protect the system against lightning and surge voltage.